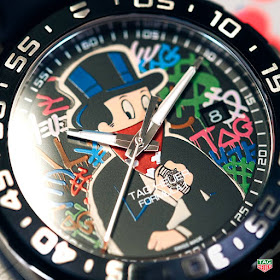 Oh my trousers, they've only gone and given him another watch!

If nothing else Alec Monopoly is divisive, and the one 'brand ambassador' guaranteed to raise the heckles of the Calibre 11 forum members. Indeed, Mr Monopoly seems to be one thing the members can agree on and unite against.... and yet, seeing this on Facebook earlier I thoroughly expected to find a thread on the forum filled with bile outrage that this watch has been allowed to exist, but instead - well... give it time I guess, but at least in the first instance T.H.E. regular Jim Dollares started the thread with an almost positive (if slightly hesitant) post...

I must admit, I hated the first Alec Monopoly watch. Spraying paint over a diamond encrusted Carrera was completely jackassery of the finest order, but this makes much more sense. If you're going to do something 'fun' do it on a (relatively) cheap watch, not a $30,000 Carrera, and when I saw this the first thing that popped into my head was those Ingersoll Mickey Mouse watches, which is great because they are a fun watch too.

The lack of markings on the dial is a slight stumble for me, it would have been cool if Alec had painted them on the dial, and also the TAG logo too, although the logo on the back of the watch has been 'Monopolised'. 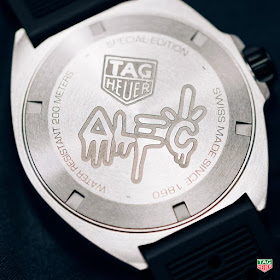 Failing that maybe an applied '12' might have made the dial look a little more 'complete' as to me although it is very busy, it looks as if there's something missing. But I really don't want to hate on this watch at all, I think it's great that TAG are prepared to put out fun pieces like this, even if it's not going to be to everyone's taste. I'm sure some fans of other brands will give this a withering look and dismiss it in the knowledge that 'their' wonderful brand would never make such a thing.

Well that may be true, but that brand will probably never do anything truly great or unique beyond tinkering with the colour accent on the second hand. I don't like this enough to buy it, but this watch makes me like TAG even more, because I love that they have the balls to make it. Too many watch brands have zero personality and are so conservative, of course this isn't going to be for everyone but I'd rather see this than a fanfare for yet another blue-dialed 300m dive watch with a slightly modified bezel... 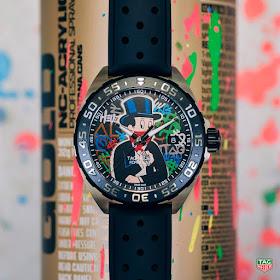 I'm guessing this watch is going to be sold at somewhere around the £1200 mark, or maybe even slightly less. Not sure how it's value will hold up, I guess ultimately that will depend on how Alec's career pans out in the long run. But think how well some of the Swatch models have done over time, especially the ones connected to artists like Keith Haring. Not that I'm suggesting Monopoly will be in that league ever, but if this is made in limited quantities (as I suspect it will - although this is a special edition not a limited edition which presumably means they make it until it stops selling) I guess with it's unique dial it could well become quite collectible in the future. 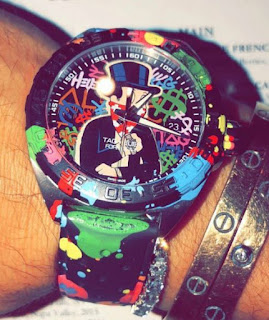 Oh... there I was being nice and then Alec goes and does this. I feel like a disappointed parent!

UPDATE: This watch is apparently an internet only purchase and is limited to 200 pieces. Price is a rather reasonable £1000, which means it could potentially be something of an investment if Alec becomes a household name, and even if he doesn't there's no other TAG that looks anything like this.