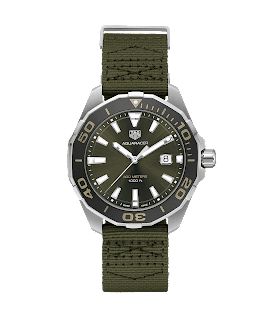 Last year at Baselworld TAG released two novelties in the Aquaracer range, the camouflage dial WAY208D and the Khaki WAY208E. I really liked the camouflage dial one (and still do in fact) but I found the Khaki a bit, well... a bit dull really. I really didn't like the way that when you angled the dial the gold TAG logo completely disappeared, and well, to be honest my feeling about both watches was that they were fun pieces (especially the WAY208D) but that by putting Calibre 5 movements in them they had priced them out of the 'fun' market somewhat. At various times over the last year I've thought about buying that 'Camo' model, because I love the dial... but I hate the strap and I hate the price. However, I'm sure if that model had been a quartz I would have bought one by now.

So it's oddly ironic that this new Aquaracer 'Khaki' is a quartz, because it's a much better looker, and presents itself in a much smarter fashion than the much more expensive Khaki Aquaracer of 2017. I'm not going to bang on about how much I hate NATO straps again, because, what's the point. This watch only comes on a NATO and to me that is a mistake. This would look great on a bracelet, and it would be an easy thing for TAG to offer to placate people like me.

But that aside, and the cyclops of course... (I thought the quartz models were going to escape that particular curse, but it seems not) this is a very smart watch indeed. I couldn't see the lume too well past curling my hand around the dial, but it looked okay even then and the gold and black aluminium bezel works very well indeed with the Khaki dial.

This is another watch that looks better in the flesh than in the render, though the photographs give a pretty accurate take on it. 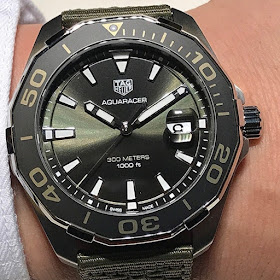 Actually, aside from the struggle doing it up, I didn't hate the strap quite as much as I thought I would. It's certainly not the abomination that the camouflage one was, but I'd still much prefer it on a bracelet, and at £1300 it looks a lot more stylish than the regular quartz Aquaracers. Chiefly though, it can only make the old Calibre 5 Khakis even harder to sell, because this is clearly a much better looking watch for £1000 less!