FEATURE: My Next Purchase... A Big Decision to be Made 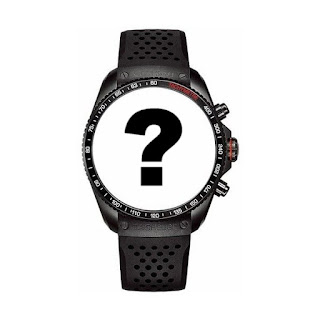 Since I bought my Microtimer a couple of weeks ago I’ve barely given the Monaco 24 a moment’s thought. Which is probably just as well, since even at £6000+ (TAG outlet NOS price) it was always a bit of a stretch and now that my TAG fund has been depleted by about £800 by the Microtimer (purchase and polishing costs) it’s even further away than it was before.

But that doesn’t mean that I’m not hankering after a sixth piece for my collection… and I think I know what it’s going to be. 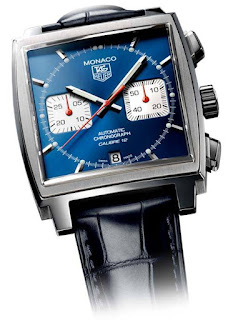 I’ve never really clicked with any of the normal Monacos, the 24 range aside they all seem a bit too retro for me. I like them to look at, but on the wrist they just don’t seem to suit me that well. I guess I’m not used to wearing a square watch and they seem kind of awkward somehow. Strangely the Microtimer doesn’t have the same issues, I don’t know if it’s because the strap is so much wider or because the front of the case is curved or because it’s so obviously ‘modernist’ in its design, but whatever it is I love it way more than any non 24 Monaco I’ve tried on. 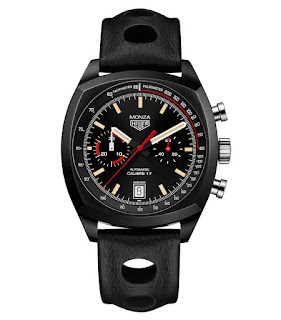 The Monza 40th Anniversary was in the frame at one point, but recent acquaintance has dampened that particular ardour… in pictures it looks great, but in the flesh the white markings seem to disappear and all I can seem to see is a lot of beige lume and some red. Again, it’s a bit too retro for me and I absolutely loathe that leather strap. 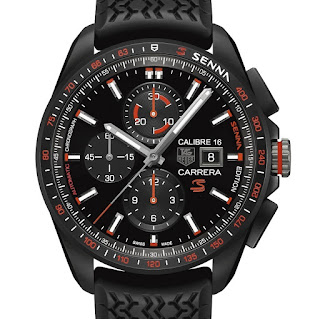 I’ve also tried on the Senna Carrera, which was quite nice, but at £4000 with no display back it just feels a bit overpriced, especially for a Calibre 16 movement which is available in lots of more affordable watches. I really didn’t take to the red markings on the uppermost sub dial either… the strap was nice though, a lovely tyre-tread rubber band which looked great and felt very comfortable.
Speaking of which, another possibility was the Monaco Grand Prix Limited Edition Carrera (again with the tyre tread rubber strap). I found a couple of different versions of these in the TAG outlet at Cheshire Oaks and contemplated purchase, but wasn’t quite convinced enough. I have to say, in the last few months I’ve rather gone of the classic-style Carreras in general, I don’t know why really, but when I finally got to see the Carrera with the perforated rubber strap I’d been looking for for ages I was deeply underwhelmed and recently the whole range is looking a bit too retro for my liking as well.

So if we’re talking upmarket TAGs there’s not too much left to go at, and I would like to get one more ‘upmarket’ piece into my collection while I have the cash available. I haven’t really seen any automatic Aquaracers that I’ve really fallen in love with and I’m still unconvinced by the Calibre 16 Formula One range (though a part of me would still like to see an example of the CAU2012.FT6038, if only to fully discount it). 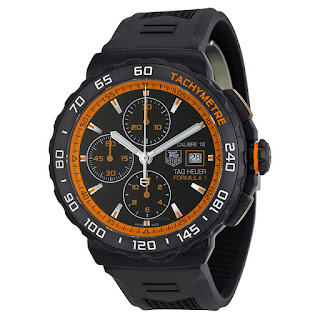 I’m sure regular readers will probably see where this is heading, after all it’s only a week or so since I wrote about my recent trip to a local jewellers to get my Microtimer polished and about the Grand Carrera CAV511A.BA0902 I tried on while I was there. 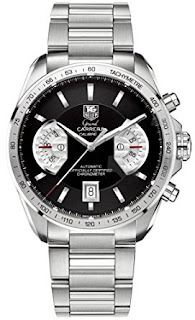 Truth be told I wasn’t all that interested in it initially, I only really tried it on because it was there and it would give me something to write about on the blog. But on the wrist it looked so much better than in the window and it made me immediately re-evaluate my feelings about the steel Grand Carrera range. This in turn has made me look again at the black PVD Grand Carreras as well, and I think it’s safe to say that as it stands I am very much looking to get some kind of Grand Carrera into my collection as soon as the right one presents itself.

Well, let’s talk about budget, because that is a limiting factor here. My current TAG fund stands at around £1800, and I think I would have to set the absolute upper limit at £4000 (preferably more like £3000 though if possible). So that counts out some of the more expensive models, like the rose gold and PVD model below. It’s very cool (and I say that as someone not usually given to admiring gold watches) but there’s no way I’m going to pick up a £7000+ watch in the condition I would require for £4000 or less, at least I very much doubt it. 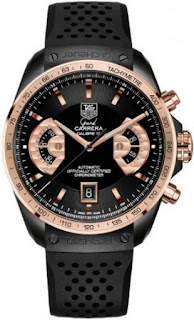 Similarly the Calibre 36 Caliper models are pretty much out of the question too. I think I’ve seen them in the outlets for about £5000-5500, but while I like the colour schemes I’m not overly taken with the large metal sections on the face. True, all Grand Carreras have decorated metal elements on the faces but I find the Caliper versions the least appealing. Also while technically clever, the caliper system is hilariously impractical and I can’t imagine anyone ever really using it. Not that that in itself is a deal-breaker, but it’s not exactly adding much weight to justifying the high price of these pieces.
I’m not really taken with the non-chronograph versions of the Grand Carrera either to be honest. I really like the symmetry of the chrono with its 3 and 9 position sub-dials, somehow when you take that away the dial looks a little bottom heavy. Speaking of which, it’s a curious thing, but the sub-dials on the three hand and chrono versions of the Grand Carrera both seem to create optical illusions that change the dial shape. On the chrono version the curve of the subdials contrive to make the dial appear oval (portrait style) while on the three hander the same effect is evident but in the opposite axis (landscape). 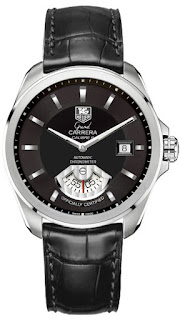 You may not agree, but I know it’s not just me because a friend of mine said exactly the same thing when we were browsing pictures of various Grand Carrera models.

So we’ve narrowed it down to a non caliper chronograph then, in either PVD or stainless steel. I mean I really like the PVD versions, but again cost is a factor and the steel ones are available in large numbers at reasonable prices.

Realistically, since I’m not an expert, I’m less than completely inclined to spend several thousand pounds on a Grand Carrera on eBay. It seems the Grand Carreras are one of the most faked TAG Heuer models and I really don’t want to end up with something worthless for my trouble. However, I did scour eBay for GC’s the other day and one which definitely caught my eye was this Limited Edition Calibre 17RS. 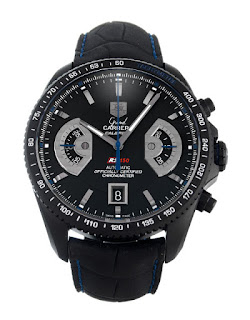 Only 150 pieces were made with the blue second hand and matching strap, and if I could find one in excellent condition then my search could well be over. Unfortunately the ones I’ve seen for sale have been more than a little rough around the edges. I did find one on Watchfinder which looked pretty good, but sadly the strap has been replaced with a red stitched version and it ruins the unique look of the watch. It’s a shame, because at £3150 I would have been very interested… 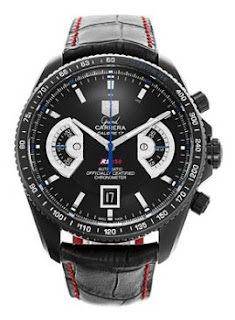 Despite this minor disappointment, most likely my Grand Carrera will either come from Watchfinder (or a similar jeweller) or from one of the TAG outlets I frequent. On my last visit to Bicester I noticed quite a few Grand Carreras, but I didn’t pay them enough attention, save that I recall seeing this PVD/Orange model and think it was within my price range. If it is, then the hunt could well be over because this is a seriously cool looking watch. I guess I need to get back there sooner rather than later and see how the land lies! 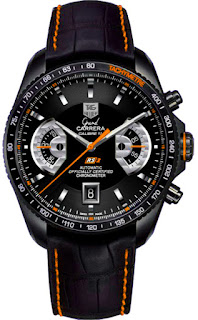 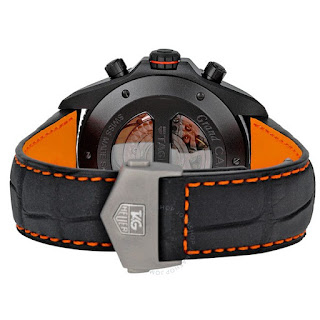 Failing that I am definitely open to the idea of an all steel Grand Carrera. The one I tried on in my local jeweller was on offer for £2700 and was in pretty good all round condition. The all steel ones do look pretty cool, but I can’t help thinking for a bit more money I’d probably rather have a PVD one with some colourful highlights… and the more I look at the CAV518K, the more I'm convinced it will be the one for me*.

EDIT: *That said, I just looked back and I did indeed try this watch on a few weeks ago and though I really liked it, I did note that the strap was slightly worn. I'm a little bothered that these GC straps may be a bit delicate and think I will have to find out about the availability of replacements before making a decision.
Posted by Robert Carrier at 13:44