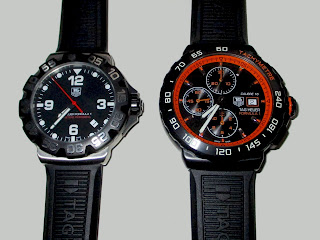 After a very long search, lasting several years, I finally managed to get hold of CAU2012 Formula One Calibre 16. Despite the long search, or maybe partly because of it, I'm still rather on the fence with this one. When I see pictures of it I still think it looks great, but on the wrist it doesn't quite excite me as much as I'd hoped (and I still don't really understand why).

However, a similar thing happened with my WAH1110-0 (pictured above left) and it was largely because the strap, or rather the clasp on the strap, was utterly rubbish and irritated my wrist so much that I couldn't enjoy the watch and 'bond' with it (for want of a better word). Once I replaced the strap and it was comfortable to wear it transformed my attitude towards it completely and it became a valued part of my collection rather than an everyday beater, so I am hopeful that fitting its larger brother with a similar strap will have the same effect.

I'm still very disappointed that the only lume on the CAU2012 is on the hands. Ideally it should have lumed markers, but if not then I kind of wish it just had silver hands. The lume itself is great, but without markers it looks rather ridiculous and annoys me at the 'corner cutting' cheapness of it (and actually once you notice how odd the hands look on the otherwise fairly dark face, you can't un-notice it!). But anyway, let's not focus too much on that here because it may be that in a few months I will have fallen in love with this one like I have with my Microtimer...

...although I have to confess, when I was in the jeweller picking up my BT0717 strap I did enquire if I could trade the CAU2012 in for the second hand steel Grand Carrera I tried on ages ago - yep, they still have it. My reasoning was that as I'd bought it quite well, I might be able to flip it without losing much money - sadly the second hand items were sold on commission so they wouldn't take it in part exchange, I'd have to buy the Grand Carrera and then they would sell the F1 for me. Hmm..

Still, this was probably a good thing. Although I was actually hopeful of a deal (because I do still want a Grand Carrera), I can't help thinking I might regret selling the F1 without giving it every chance to win me over.

So having established that the clasp was terrible I started looking into my options. With a 22mm lug width the options were fairly limited if I wanted a genuine TAG Heuer strap, though there were plenty of 'eBay' options of varying style and quality. Strangely the CAU2012 has a unique rubber strap that isn't used for any other watch, which set alarm bells ringing. I searched for BT0717 (as I knew that was the 22mm version of the BT0714 I bought for the smaller F1) and it brought up just one watch. 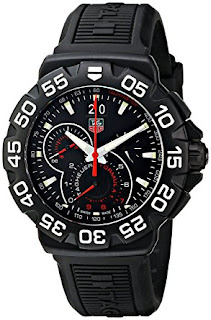 The BT0717 strap is used on this Formula One and also with a slight modification on the Kimi Raikkonen version. The Kimi F1 uses a BT0718 which has red highlights around the pin holes (and a red backing), which is quite cool - but not for an orange watch, and I'm not sure how available that strap is anyway, I suspect when you break it you have to replace with the BT0717 - but I don't know for sure. 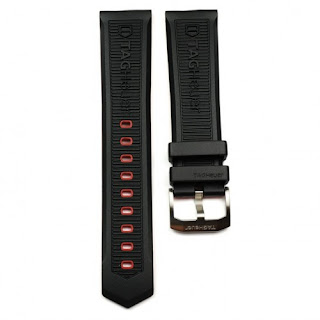 The BT0718 Strap as fitted to the Kimi Raikkonen Formula One

So, having purchased my previous BT0717 from Michael Jones (Northampton), I gave them a ring and was quoted a very reasonable £48. Rachel there was very helpful actually and she contacted TAG to see if there was any other options like perhaps a different deployment clasp or strap that would fit. Sadly there wasn't, though I wished I'd enquired about the possibility of fitting the tyre tread strap found on the Senna Carrera.

One issue there though that I wasn't quite sure about, was the fact that on this watch the lugs are closed in, unlike the Carrera where you can fit pretty much any strap without worrying. Since the CAH1012 looks similar I had to assume that it has the same basic case as the CAU2012 and that the strap would fit perfectly.  Thankfully I was right, though if not I was mentally prepared to 'make it fit', as my other options seemed less appealing.

I did see a strap in Debenhams which had a lot of orange on it, and thought it might actually be a good fallback, but it was actually £70 and when I checked it was a lot more grey than I remembered, which would have looked a bit rubbish I think. My other possible route was a 'carbon fibre' effect strap, but thankfully the BT0717 fitted perfectly so I didn't have to go down that route.

The guy in the shop was rather bemused that I was changing the strap on a seven week old watch, until I explained the problem. He said that he had owned a Breitling in the past with the same issue, so it's obviously not just TAG who can fail at making clasps!

Despite only being 2mm wider that the BT0714, the BT0717 feels a lot more chunky and substantial. It's actually quite hard to get the tail end of the strap to fold under the retaining pieces, but I'm wondering if that might improve as the rubber wears in and softens up a bit. I can't remember what the BT0714 was like when I first had it, though it must be said I don't remember any struggles, and obviously this watch won't get anything like the wrist time so it will probably take a long time for any 'wearing in' to take effect.

Once it's on the wrist though it feels very secure and I actually think this strap looks better than the one which comes on the watch, so I can't really understand why they went to all the trouble to design and make a bespoke strap when they could have used this one? Of course, ideally they would have made this design with a (much better) clasp, but there you go.

So, to sum up, once again the service from Michael Jones was pretty good (it did take six weeks to come, but this was because TAG were out of stock and Rachel was very helpful with trying to source me an alternative strap) and the strap looks and feels fine (if a bit chunkier than is really ideal). So let's hope that wearing the CAU2012 on this new (comfortable) strap allows me to start enjoying this watch and I can get on with saving for my Grand Carrera rather than looking to trade up to it. Time will tell I suppose, and I guess at least if I do come to sell the CAU2012 at some point, the original strap will be in perfect condition!
Posted by Robert Carrier at 11:34