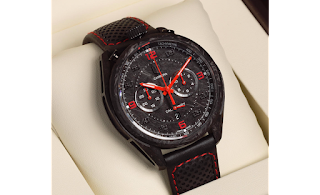 An eagle eyed Calibre 11 forum member spotted this one in a Bonhams auction which was due to take place yesterday. This very rare TAG Heuer Carrera Turbina LSR is number two of a limited edition of just ten pieces, made to celebrate the Mad Max Bike Racing team and their land speed records.

This watch actually belonged to the guy who actually rides the bike, a multi-millionaire called Zef Eisenberg (you may know him as the man who sold his 'Maximuscle' company to Glaxo for £162m), so it has great providence, and the estimate was set at £8,000 - £12,000.

Bearing in mind some of the ridiculous prices paid in recent times for things like 'one of' the Monaco's used by Steve McQueen for filming ($800,000) this seems like an absolute steal. If I had that kind of money I might be tempted myself, because I wouldn't be surprised if this sold for £8,000 or failed to sell, such is the apathy towards TAG Heuer models vs Heuer branded pieces.

I'm unsure if this model was ever sold to anyone, but I'm willing to bet the price would have been in that range anyway, when you look at what you're actually getting. A carbon fibre watch with a Calibre 1887 movement, box and papers, a glass back and only ten pieces made,

I will try and find out the result of the auction and update this post when I do.

UPDATE (3rd July 2017): It appears the watch failed to sell at auction.