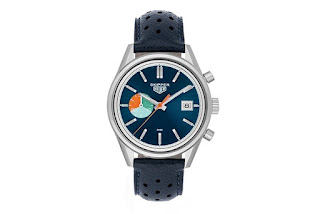 Pretty much anyone who is heavily into watches will be aware of Hodinkee, they inhabit a particular place in the market which, I have to confess, doesn't appeal to me much. Their aesthetic seems to be exactly that illustrated by this watch, so I suppose it's only fitting that this particular model is a collaboration between TAG Heuer and Hodinkee.

Limited to 125 pieces (and sold out in a few hours, despite a hefty $5,900 price tag) this piece is actually something of a mish-mash, using old cases already engraved with 'Carrera' despite this actually not being a Carrera (although somebody should tell Hodinkee because they they clearly advertised it as the 'Carrera Skipper'. Hmm).

I must admit, I don't hate this as much as I did when I first saw it... although, to me the dial looks horribly unbalanced. The original had two sub-dials which obviously gave it a better symmetry, perhaps it's because of the solid bright colours on the sub-dial, if the dial was the same colour as the main dial, either textured of simply printed on, it would probably have looked less in your face and helped the balance of the piece. 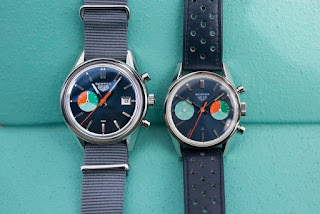 The Hodinkee Carrera Skipper (left) and the original Skipper

Looking at the picture above you might be forgiven for thinking the obvious answer would be to pick up the original Heuer Skipper, but as there are thought to be only 20 pieces in the world (and we can safely assume that the issue of this Hodinkee model is only going to increase interest) it's safe to assume that $6000 is going to get you anywhere near one of those.

One thing that does confuse me slightly, is the lack of an obvious running seconds. The sub-dial at 9 is apparently a 30m chrono counter, and I'm not sure about the original version as it seems to have two dials marked 10-20-30, unless one of those is a 30sec running counter... which would be a bit strange in itself.

Another thing which seems to be causing some rumblings on the Calibre 11 forum is the 'glass box' style sapphire crystal. A lot of people find the distortion it causes annoying, but to be fair if they were trying to replicate the 'general look' of the original then it isn't out of place.

I was quite excited when I heard that TAG were announcing a new watch, but significantly less so when I learned it was a tie-in with Hodinkee. Hodinkee have an air of smugness about them that irritates, they are the sort of company that would send out watches in boxes with rough string tied around them and a hand written label, as if it was a quarter pound of hand made fudge. I'm surprised they don't send you a complimentary pair of deck shoes with your purchase as well!

Sorry, I tried to hold that in, but it just had to come out... 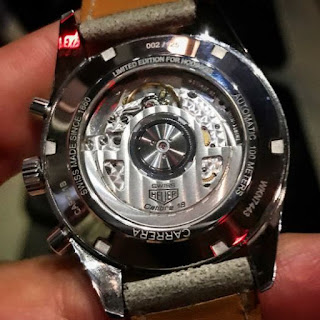 I'm all for the idea of producing very limited edition watches, and even though this one doesn't appeal to me I am surprised at the negative reaction on the Calibre 11 forum, I would have thought anything retro looking with a 'Heuer' logo would have gone down a storm, but that doesn't seem to be the case.

Still, all 125 were sold within the day, so Hodinkee have obviously smashed it out of the park with their audience. I assume at least some of those watches have been purchased as an investment, though it remains to be seen whether that will pay off, I've seen enough limited edition TAGs in the outlet at knock down prices to know that a limited run is no guarantee of anything. However, I guess with such a limited amount of original pieces, there will always be a certain level of interest and that should at least mean these watches don't plummet like a stone.
Posted by Robert Carrier at 10:10