FEATURE: Reappraising the Formula One Kirium 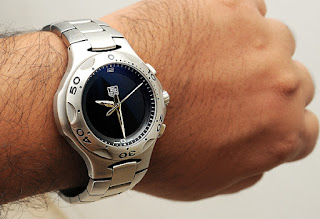 I bought my Formula One Kirium way back in 2004, and for a long time it was my one and only TAG. I never wore it as a daily watch, I had a series of cheap everyday watches and kept the F1 Kirium for going out, which explains why mine is still in near mint condition. The photo above isn't my watch, but this photo really shows the watch off as it really looks on the wrist, and gives a much better impression than the multitude of head on pro-shots available.

The Kirium remained my only TAG until 2013 (I think) when I bought my Aquagraph. Inevitably I suppose, the new model became the 'favourite' and as I added the rest of my collection so the Kirium slipped further down the queue whenever there was wrist time available. Not that I would ever sell it, because it was my first TAG and I still love it, but it definitely took a backseat.

For some reason, in my mind I always think of it as being smaller than it actually is, perhaps because the shape of the case is very ergonomic and it flows very nicely from bezel to bracelet, unlike for example the new 'Heuer 01' Carreras which are very much separate entities. The watch has a unidirectional bezel, since this is actually a diveable watch (rated 200M). The action on mine is very crisp, although that may be because I never turn it! Indeed I didn't actually realise it turned until relatively recently... but that's maybe partly because it sits very snugly to the case and because of it's smooth design it never catches on anything and moves accidentally.

It's one of those watches that surprises you. Every time I get it out to wear it I realise it's really not so small (40mm) and I remember what a looker it really is. The dial is presumably 'black' but its actually an LCD display and that mixed with AR coating gives it a very dark purple tone which looks very, very cool indeed.

The bracelet is the best bracelet I've ever worn, it's so comfortable and smooth. The clasp is fine on mine but it isn't a deployment clasp and I can imagine regular use would eventually wear it out. It's still a nicely machined clasp and I would take it over some of the clasp TAG are using even today on some of the Formula One models.

For the life of me I can't understand why it's called the Formula One Kirium. You wouldn't name a watch the 'Monaco Carrera' or the 'Monza Aquaracer' would you? It makes no sense, it's a Kirium first and foremost, the only real connection to Formula One is the text on the back heralding TAG's official timing of F1 and of course the stop watch capability. 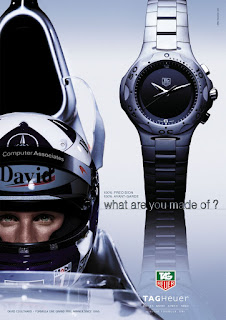 To be honest, I never use the digital functions, I just think the watch looks so cool with the plain dial that I don't even want to see them. You can just have the date at '3' which is okay, but personally I still keep the dial completely clear at all times. For the record the digital functions are as follows

Date only, Digital time, Digital Day/Week/Time, Alarm, Chronograph, and... there's another function that I think is either a second time zone of a lap timer. Not sure, well I did say I never use it!

There is also a back light, which is operated by pressing the crown in and this works perfectly giving clear time readings and stopping the seconds hand for the duration, when the light goes off the second hand jumps forward to resume the correct time. The hands do have a small amount of lume applied and there is a lume pip at the 12 position, and this is still going strong 13 years down the road.

The dial isn't completely bare, as there is a decent sized TAG Heuer logo in white and more subtley there is a small 12 and 6 marking on the rehaut along with a clear white minute track. The hands are beautifully polished and faceted steel which catch the light and just look quality.

This watch was the pinnacle of the Kirium range, and cost a pretty penny even thirteen years ago. I bought mine from the grey market for about £1350 but the list was about another £3-400 IIRC. Even now that seems a lot of money for a quartz watch, but I have no regrets. Unlike the basic Kiriums that you see ten a penny on eBay, I think this has aged very well and still looks total class to me. 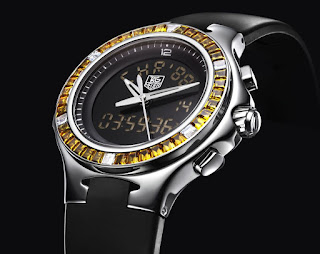 Of course, being TAG there were other options available and I have considered purchasing a rubber strap for my Kirium (of course!) but being that the bracelet is so good and I consider this my 'dress' watch, I don't really see the need and to be honest I think the bracelet looks much nicer anyway. As for this jewelled bezel version, well... I'm not sure teaming the jewels with the rubber band was a great idea to be honest, true they go well with the black but still.

One thing this picture does show off is the alternative polished finish that was featured on some Kiriums. Personally I think the brushed finish on the F1 Kirium looks so much nicer, the polished might have looked nice when new but so often you see the polished ones on eBay now and they just look horrible.

One interesting and very useful function (for people like me who don't want to wear the watch everyday) is a sleep mode. With the dial digital free you pull the crown out and then press the top pusher. The text 'Batt' comes up and you have to hold the pusher for a couple of seconds until it goes off. This puts the watch into low power mode and when you come to wear the watch again all you have to do is push the crown in and the watch powers up and resets the hands to the correct time, much like a Calibre S does when you switch between chrono and time functions. To be honest, that is very cool and worth the price of a second hand model any day. Thanks to this function I think I'm still on my third battery in 13 years - not bad!

You can actually pick these up on Watchfinder for less than £700, which to me is the bargain of the century. This is a magnificent watch and I can't help but think it's somewhat dragged down by the lesser watches in the same range. I guess it's a bit like having the best house on a rough street... a bit of a pain if you're trying to sell, but a bargain in the offing if you're looking to buy.

I say get yourself an F1 Kirium and enjoy it, hands down the best bang for buck TAG you're ever going to lay your hands on.
Posted by Robert Carrier at 15:05