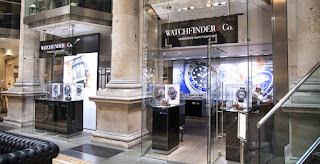 Another visit to London, which this time included trips to both the Capital's branches of Watchfinder.

We packed a lot into this day, not all of it Watch related. We did the Emirates Air Line Cable Cars, Tate Modern, Regent Street, Covent Garden... not to mention a cake stop at the newly redecorated 'Richoux' in Piccadilly.

But for the purposes of this blog, I'll keep it focused on the watches...

We didn't go to Harrods or Selfridges this time around, and we didn't go down Bond Street either, so the only really crazy-money watch we saw was a Richard Mille in the Canary Wharf Watchfinder. But let's start at the beginning, which means the Royal Exchange store which we've visited a couple of times before.

As usual there was a plethora of Rolexes in there, which I didn't really pay much attention to. I did have a look at some of the Hublots, but realistically the ones I actually like are out of my price range. So far as TAG Heuer goes they had about twenty pieces I would estimate... one thing that is a little annoying about Watchfinder is that they don't have the prices marked on the watches, which is fine with the TAGs because generally speaking I can take a good guess, but it's something that is a bit annoying on the other brands. 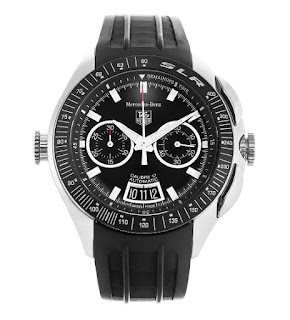 It was on offer for £1750, which seems pretty reasonable to me. When I saw it in the TAG outlet at Bicester it was on for about £3000, and while this one doesn't have a box of papers it is in excellent condition and actually it does look a lot nicer than the picture suggests. My main issue with it is the crown on the left hand side which seems to stick out far too much and which has quite a spiky edge to it (the crown turns the rehaut, providing a moveable 'remaining time' scale), I could feel it digging into my arm, which was a shame because for that money I might have been tempted.

You can read my previous 'On the Wrist' piece HERE

My wife pointed out an unusual looking watch in the cabinet, and she asked to try it on. It was a men's 4000 series (£575) and it appeared to have some odd marks on the dial. When the watch was taken out and showed to us it became clear that the marks were in fact reflections which moved as the watch was handled. I'm really not sure where the reflections were coming from but they made these odd part circles on the dial. I can only assume it must be some freak of the glass and the lighting in the shop. 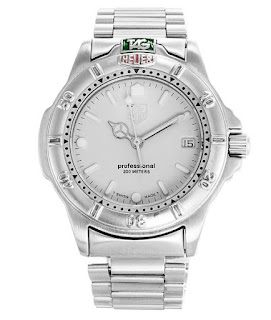 This picture doesn't really show the watch as it is, it looks here like it has a silver dial but in actual fact it's a sort of cream colour, which I thought looked a bit odd, but my wife liked it. Strangely, since my wife's wrists are very small, this looked fine on her. It didn't look any bigger than her ceramic F1 diamond spot really, which makes me think this actually must have been one of the 'midsize' watches, because I tried on a 4000 series last year and it was much more man-sized than this one. 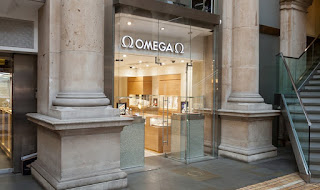 Next stop was the Omega boutique across the way, nothing particularly exciting to report really (not that I'm much of an Omega fan anyway), but I did see one watch I quite liked which was a Seamaster GMT Chronograph with red detailing and white hands. 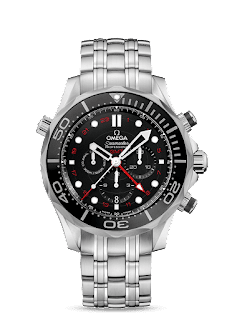 It seems you can get a non GMT version of this for £4000 which rather surprised me, it looked like mega-bucks in the cabinet.

Leaving there we made a quick stop off at Lulu Guinness for the wife to dribble on the handbags and point out a wedding anniversary present idea. Then after lunch it was off to the Tate, then down the river to the cable cars and then to Canary Wharf.

We hadn't been to Canary Wharf for a very long time and it was just as confusing and incomprehensible as we remembered. We tried to walk into the HSBC building by accident and a kindly security guard pointed us back in the right direction. After some more aimless wandering (and to be fair the maps in there are rubbish!) we asked another security guard and he showed us the way. 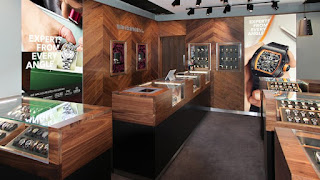 Unfortunately, after all this effort, the Canary Wharf branch is obviously the poor relation to the Royal Exchange. There were a few interesting things in there like the Cartier Dive Watch, the Richard Mille in the window, a bright yellow AP Royal Oak Offshore which I liked and a few Hublots, but it was all a bit of an anticlimax. On the TAG front they had a couple of Calibre S Aquaracers and some other rather everyday models, but nothing terribly exciting.

So we amused ourselves looking at some of the most hideous women's Rolexes, with bright pink faces, diamonds and massively oversized cyclops... lovely!

I think it's safe to say we won't be returning. It's such a pain to get there and it's simply not worth it, after all that we didn't even try anything on and instead headed off to Piccadilly for cake.
Posted by Robert Carrier at 10:18