At some point last year I pondered going to Baselworld 2017, but having read what other people wrote about the experience and weighing up the costs involved I decided against it. Added to that, while I could probably spend all day looking at watches I think my wife would probably get bored after an hour or two!

So, like everyone else (well, not everyone else I'm sure) I'm spending this week glued to various internet sites trying to get the latest scoop on what's being announced and what might be in stores later in the year.

And of course when it comes to getting the inside scoop on the new releases from TAG Heuer, the best place to look is naturally Calibre 11, and David has provided some great photos and insight into the new releases on his website.

I must say the Calibre 11 forum has been pretty divided on the new releases, with several people bemoaning the lack of heritage pieces and pointing at the Omega Trilogy as an example of a company who are listening to their followers. Personally I find the Omega releases as dull as dishwater, and the new Autavia really does nothing for me. Mind you, the Autavia seems to have done a fairly good job of splitting opinion on the forum as well, with some of the target audience complaining about it's modern 42mm size and non-authentic appearance.

That said, there is a special edition 'JH85' version of the Autavia coming out which looks much nicer. This has a silver dial and the large numbers on the standard Autavia bezel have been replaced with an unusual two-tier arrangement which makes it look much more modern and technical. 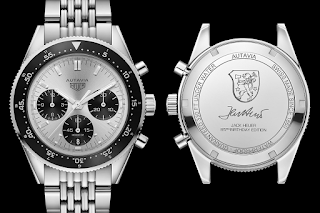 I still don't like the bracelet, but the difference from the standard Autavia is so clear, I think this one will sell like hot cakes. And who would have thought my Baselworld piece would open with a positive story about a 'heritage' Heuer? Not me, that's for sure.

Moving on, one which caught my eye is something that was leaked a while back, but looks even better in the official pictures. This is the LE Red Bull Carrera Heuer 01, this is available with either a bracelet or a blue stitched strap which I believe has a rubber backing. 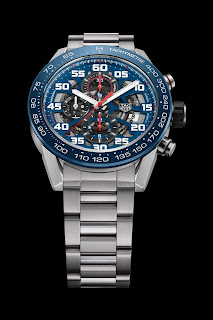 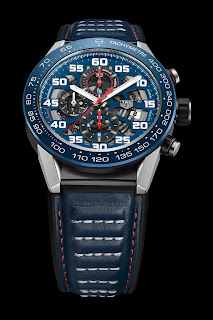 One of the best things about this model without a doubt is that unlike the recent Manchester United editions, TAG have resisted the temptation to plaster the Red Bull logo (which lets face it isn't the best of logos - but then Manchester United's isn't exactly 'art' either) on the dial. Indeed the only reference to the Formula One team is on the smoked glass back which neatly obscures the view of the Heuer 01 movement 'Nismo' style. Yes, that was sarcasm... sorry.

I think if I was going to buy another Heuer 01, this would probably be the most likely candidate. The blue bezel looks great and I really like the Arabic numerals, which critically differentiate it from the original skeleton which I own. The red touches on the dial add that extra little oomph that makes a nice watch a very nice watch, and the red stitching on the strap picks that up nicely.

The watch is available in two sizes 43mm and 45mm, and as with the other Heuer 01 Carreras the 43mm doesn't have the PVD case. With that in mind I think I would either take the strap version in the 45mm or the bracelet in the 43mm.

Last year TAG launched the colourful Aquaracers in the Sand, Blue and Red configurations, this year they've gone a bit mad and released a Khaki dial version and a Blue/White Camo version as well. The khaki looks okay, and for once I don't even mind the strap. Can't see the point of the chromed strap retainers, they should definitely be black, but the strap as a whole does fit the whole military/Action Man aesthetic. As ever, a good option would be putting it on a plain black, rubber strap and probably even more so when it comes to the camouflague version as well, sadly that's only available on a rather disgusting strap, which, well... doesn't cut it, frankly. 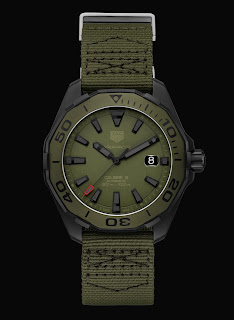 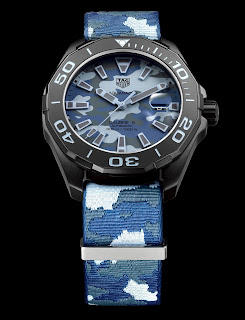 Also unveiled at the show, TAG announced a new Ayrton Senna Carrera with a Link style bracelet (the first new style Carrera to feature one, and very cool it looks too), a brace of new Carreras with Blue and Anthracite faces (expected as replacements for the outgoing 1887 models), a new carbon composite Carrera 02T (which I can't really get that excited about if I'm honest) and a new range of Lady Carreras which seem to be garnering praise on the Calibre 11 Forum, but which leave me wondering how they'll go down with their actual intended audience.

Anyway, I don't want to say too much about these watches right now, but I really look forward to seeing them in the stores and getting a closer look and reporting my findings throughout the coming months.