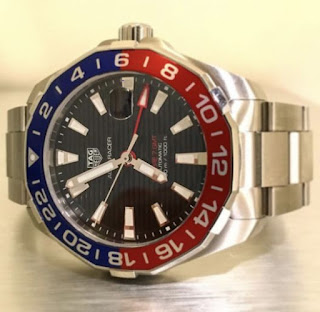 Again, this doesn't seem to have been 'officially' announced as yet, but this photo has appeared all the same...

I actually quite like this one, or at least when I first looked at it I did, now I'm not quite sure how I feel about the red and blue on the bezel. I've always had this thing about Pepsi bezels, I really dislike the part where the red and blue joins together. It's fine on the '18' but on the '6' the join is visible inside the lower circle of the six and that kinda bugs me. I don't know why, but it always does.

Somehow the mixture of colour really accentuates the disparity between the outer dodecagon shape of the bezel and the circular interior, and I'm not sure it works quite so well as on an Aquaracer with a single colour bezel. Maybe I'm just used to seeing circular Pepsi bezels so it looks a bit odd to me?

I think this is definitely one that needs to be seen in the flesh to fully gauge how well it works, a lot could depend on the exact shades of red and blue, and I know a lot of people prefer the 'Batman' (blue/black) look rather than this configuration. I must admit I quite liked the Formula One GMT myself. And it had the added bonus of no cyclops!

Overall though, I think this is a better looking watch, though if I decided to buy one it would purely for the aesthetics as I have zero use for a GMT time piece myself.
Posted by Robert Carrier at 22:33