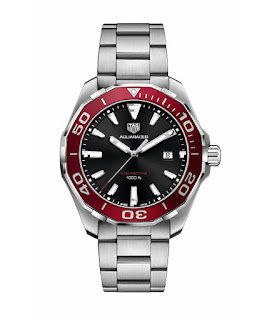 It must say something about the success of the Tudor Black Bay that upon seeing this new Aquaracer for the first time one is compelled to think... "Ah, the Aquaracer Black Bay!", this despite the only real similarity being the black dial and red bezel. Because while Tudor's offering is very much a 'classic' style watch (coming complete with a distressed* leather strap - 'shudder') this new quartz watch from TAG Heuer looks very modern indeed.

It's a pretty simple watch, but the red bezel makes it look rather tasty and highlights the unusual twelve sided bezel that the Aquaracers are sporting these days. Like most Aquaracers I bet this will look great on a black rubber band, I hope they make it with the fluted strap that the yellow Aquaracers are currently being sold on, preferably with a red backing, that would be pretty neat.

And that's my main problem with this watch really, it looks great, but it's a quartz, so I probably wouldn't buy one. No doubt it will appear in an automatic version later on, but what's the betting part of the 'upgrade' is a wacking great, goggly-eyed date bubble?

I'm guessing the price will be around the £1200 mark, which will make it a great value watch, and in a few years I can well imagine picking one of these up at the outlets for about £900, which would be even better.

Apparently the watch is also going to be available with a blue bezel/black dial, and an all black combination as well.

* It's not so much distressed as completely knackered looking, but there you go... why doesn't anybody make a 'distressed' bracelet? Is it perhaps because everyone would say 'It's not distressed, it's knackered' by any chance?

**Cyclopes is the plural of cyclops - I looked it up!

Read more about this and other new TAGs at Calibre 11