The other night I felt I needed a TAG hit, since I haven't worn any of my (boxed) watches for a couple of weeks. Of course I wear my WAH1110-0 everyday, but I as I pulled each one out of the cupboard and opened the boxes I got that familiar warm, fuzzy feeling one can only get from looking at expensive(ish) timepieces. 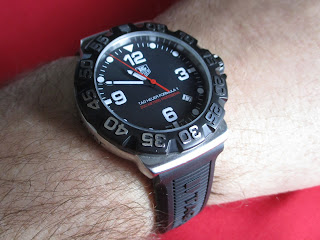 I think the watch that impressed me the most last night was the Aquagraph. I haven't worn it for quite a while now, and I was struck by how handsome it is, and indeed how cool a steel watch can look. It instantly made me pine for the steel Grand Carrera I nearly bought not so long (and still want to buy), but of course my fund is much depleted since the acquisition of the CAU2012 Formula One. Indeed I would be surprised if another TAG is on the horizon this year, after all I have bought two since Christmas (well, I mean... that could definitely change!). 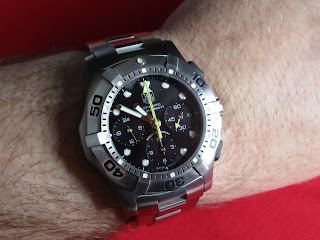 Incidentally, the pre-owned steel Grand Carrera I tried on in the jeweller in Northampton is still in the window (asking price £2700), maybe it will still be there when my fund has grown enough to purchase it? Then again, I know I can get one cheaper from Watchfinder, and they tend to have several examples of that model in stock at a time. Probably what I will do is sit on my cash until Watchfinder have one of their sales, and then pounce like a pouncing thing...

Anyway, where was I? Extolling the virtues of my beautiful Aquagraph I believe... yes, what a watch that is. I may have to wear it tonight when I take my wife out for her birthday meal. And yet... 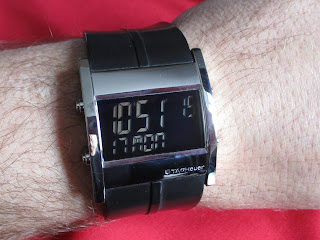 ...I bet I won't, because I am pretty much still besotted with the Microtimer. Oh yes, the honeymoon continues. Even the arrival of the CAU2012 hasn't tempted me away from it yet. It was a gamble buy, as I'd never clapped eyes on one, but I absolutely love it to bits. Sure it's a scratch magnet, which means it's never going to be an everyday wear, but it looks so cool under a shirt cuff, I just can't resist it's charms. It has far exceeded my expectations, it really has. I knew the only way I was going to get to see one was to buy one, but I had this feeling in the back of my head that it might be a short term purchase, back on eBay after a brief fling (especially after David's comments on Calibre 11 about how he'd bought and sold his several times), but that's not going to happen. Such a unique and unusual piece, it sticks out like a sore thumb in the collection and looks truly avant garde on the wrist.

To be honest, the CAU2012 hasn't really found it's place yet. I won't bore you (again) with how utterly appalled I am at the rubbishness of the clasp and it's ability to rip my wrist to shreds within an hour of putting it on. Suffice to say that I am currently employing several pieces of electrical tape on the reverse side to act as a cushion, to effectively lift the two sharp edges away from my wrist. As you can imagine this is neither ideal nor endearing it to me very much. 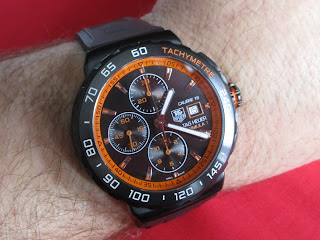 But I haven't given up hope yet, because this is much the same way I felt when I first bought my WAH1110 and had exactly the same problem and that turned out fine in the end once I'd got a better strap on it (the difference I suppose is the CAU2012 cost over four times as much as the daily wear F1). However, it shouldn't be too much longer until my BT0717 strap arrives now, and hopefully it will fit the CAU2012 and I can start wearing it and enjoying it, rather than wearing it and sneering at it it ruefully because of the terrible, terrible clasp. 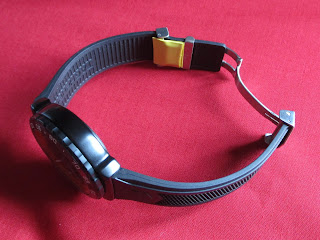 I must admit I am also rather disappointed that the only parts of the watch that have lume applied are the hands, I was looking forward to a display of gorgeous orange lume, but no such luck. Nothing on the dial is lumed, not even a marker at the twelve. Very disappointing, and very poor for a watch which costs nearly £2500! But let's not dwell on the negatives, it's a very cool looking watch (in the daylight) and I'm sure once the strap issue is resolved I will start to bond with it. 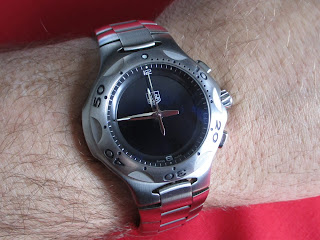 One watch which has a very strong bond with me is my beloved Kirium, which still looks as good as new and is utterly timeless. With so many new purchases of late, this one really doesn't get the wrist time it deserves, but I'm sure it will come back into vogue at some point. It will certainly never get sold, my first TAG will always have a special place in the collection and I'm so pleased I never wore it as a daily beater, having seen the state some of them are in these days.

And then of course there's the Carrera Heuer 01 which also hasn't seen much wrist time lately, but still has plenty of wow factor when you open the box. 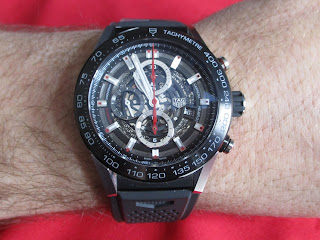 This is still the number one in my collection and it's hard to know what could take it's crown. As much as I love my other watches, this one is definitely something special. 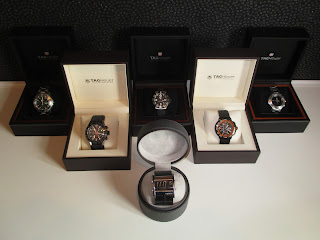 I definitely need to start wearing these watches more, and not just when I go out. I think a good place to start would probably be to designate some watches as weekend watches and just wear the WAH1110 to work. The only problem with that I guess is that the weekend tends to be the time I spend doing gardening or DIY, and so I tend to take my WAH1110 off anyway!

Well, as I thought, when it came down to it I plumped for the Microtimer for the wife's birthday meal, and then a family party on Sunday saw the Heuer 01 back on the wrist. I did get the Aquagraph out and even put it on, but then I spent about ten minutes looking at all my watches and eventually decided on the Carrera.

Apologies for my poor photography skills!
Posted by Robert Carrier at 11:45