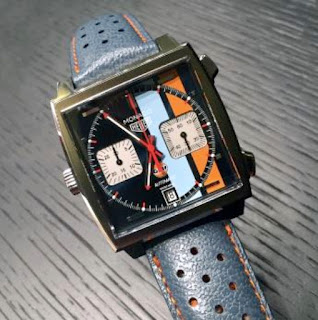 This, apparently, is the upcoming new Heuer Monaco, due to be officially unveiled by the end of 2017 (and leaked by Govberg Jewellers on their Instagram). At first there was a suggestion on the Calibre 11 forum it might be a fake/photoshop mock up, but it seems that it is real and as expected (and in line with TAG's new policy) this watch will feature the Heuer logo rather than the TAG Heuer logo. TAG wants to differentiate it's 'heritage' pieces from it's modern lines and sees this as an obvious way to do so.

In a recent interview JCB also said he wants the heritage line to consist of 'single' pieces, in other words he wants one Autavia, one Monaco, one Monza... I think this is a fairly misleading suggestion, as I'm sure they won't be able to resist special editions like this Gulf version, It surely can't be long before TAG announces a couple of special edition Autavias, presumably one in white and blue and one in black and orange..

Similarly it wasn't too long ago that TAG released another Monaco (the CAW211B.FC6241 below), hardly the actions of a company trying to reign in their model range. 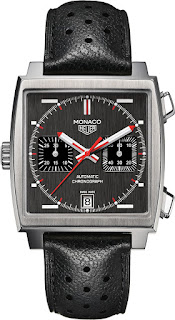 Quite an attractive Monaco though, it has to be said, and yet another with the crown on the right (as in 'correct') side of the case for the Steve McQueen fans.

But what of this new model? Well the strap looks rather nifty, in blue with contrasting orange stitching, although to these eyes having a blue strap adversely affects the blue on the dial, making it look somewhat insipid and overly pale. Other people have commented that the red second hand and dial details look wrong paired with the classic 70's orange/blue colour scheme, and though I didn't notice it at first I have to say I agree. Red and orange are indeed uncomfortable bedfellows.

Not too sure what's going on with the right hand sub-dial either, I guess it could just be running, though the chronograph appears to be set at 12... slightly odd, but then this isn't an official photo so it could just be one of those things. Having seen the Autavia prototype with the date fitted sideways perhaps we shouldn't analyse pre-release photos too closely.

Still, I'm sure this model will sell well, it seems anything with a Gulf logo on it is automatically collectable, and I imagine this will retain its value better than most Monacos. I recently saw a previous Gulf Monaco which sold at auction for about the price I'd imagine this to be offered for (about £5000) and no doubt it will be limited to a certain number of pieces.

I don't think it's one for me, I'm still very much on the fence when it comes to Monacos, and since my near miss with the Monaco 24 even they have pretty much dropped off my radar. I like the look of them, but I just don't like how they look on the wrist (not so much the Monaco 24, which is bevelled and less obstinately 'square' - though it is very thick).
Posted by Robert Carrier at 15:39