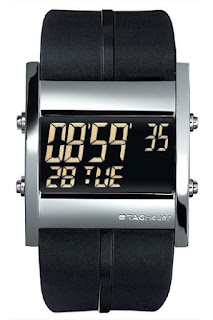 Though I've never actually seen one of these, I've always had an interest in them. Of course, it could be that if I actually got to try one on I might totally change my mind, but there's something about it which I like, I think it's just that it's so very different and epitomises the 'Avant Garde' side of TAG Heuer which I appreciate (I'm potentially more likely to buy something unusual like this than a 'traditional' 'Heuer' Carrera).

The CS111C is largely the same as the original CS111B launched in 2002 as a limited run of 999 (then known as the Micrograph), that watch won the Best Design Award at the Grand Prix d'Horlogerie de Geneve and generated sufficient interest to be added to the standard range.

There is an excellent article about this piece on the Calibre 11 website (link below) where the author explains his relationship with the model and how he's sold and bought back the watch a couple of times. I can imagine that, honestly... it's so 'out there' that I can imagine someone getting tired of it only to miss it's quirkiness once it was gone.

I'd definitely like to try one on, even though I'd rather put my money into automatic watches, I just can't help but like it, even if it is slightly odd. My main concern really (and one which is mentioned in the Calibre 11 article also) is the watch's susceptibility to scratches, or rather the extent to which they show up on the highly polished surface. As someone who tends to walk around shielding his watches from any slight perceived danger, this would probably make wearing this watch more trying than enjoyable, but equally I could see me trying one and falling in love with it.

Check out the article below, it's worth it just for the photograph of the special Brazilian edition with the denim strap!

http://www.calibre11.com/tag-heuer-microtimer/
Posted by Robert Carrier at 17:29