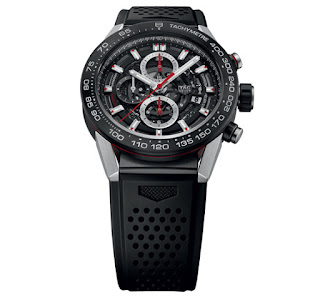 One thing that can cause watch buyers a lot of heartache is where to buy your next watch from and where to get the best price. There's always plenty of deals on eBay, but once you get beyond a few hundred pounds it takes a certain strength of will to click the button and take the plunge. But there is an alternative, and I'm sure most of you have seen names such as Precision Time and Iconic Watches popping up in internet searches offering 20% or so off the prices of the watches in your local jewellers.

These companies are part of what is called the 'grey market', whereby they buy the watch you require from an authorised dealer in a different country at a discount and (in some cases) use the currency difference to offer you a discount on your domestic price. Because the warranties on watches are usually 'worldwide' all it really means is that your watch has a warranty card filled in a different country, and you might lose a few days off your warranty while the watch is in transit.

I must admit I was very skeptical about using one of these companies for a number of reasons and it took me an awful long time to decide to go ahead with the deal. What appealed to me the most about Iconic Watches over the other companies was that they have an actual high street presence rather than being an anonymous internet company that could disappear overnight and take my money with them. To me that was a major source of reassurance, and it also meant that I could collect the watch and see it before I paid the balance due (which for me was a massive plus).

As much as it may be socially awkward to use a grey market dealer, the fact is that when I made my purchase the Carrera Heuer 01 was selling for £4000 (having been reduced from it's initial market price of £4300 - and which some jewellers are still selling at incidentally) and I was able to purchase mine for just £3290. For me £710 is a lot of money and represents a good couple of weeks wages, so I really had to consider this option.

Once I had completed my due diligence and satisfied myself that I wasn't making a terrible, terrible mistake, I contacted Iconic who answered my emails promptly and without fuss. On the website they were quoting about a four week lead time, but mine actually came within four days and having placed my order on the Monday I received a phone call on the Friday telling me that my watch was ready for collection. This of course sparked a slightly panicky phone call to my wife asking if she wanted to make a six hour round trip to pick up my new watch!

As it happened we made a day of it and stopped off at 'The Spread Eagle' in Mellor for lunch before heading into Blackburn to find Iconic, which seemed somewhat less than visible on Google Maps! Eventually we gave in and phoned them to ask directions and a few minutes later we were standing outside the shop. They had told us to press the intercom as the shutters would be down, and the door was unlocked and we made our way inside. 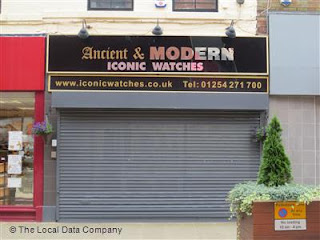 I had this idea that the inside of the store would be dripping with Rolexes, Hublots and the like, but aside from a Chopard Grand Prix de Monaco, an Audemars Piguet Royal Oak and a small range of mid price TAG Heuers and Omegas there was just a few pieces of jewellery (which I didn't really pay much attention to if I'm honest). I suppose the security and insurance considerations have to be taken into account, but it was a bit of a shame that there wasn't the opportunity for drooling over more watches that I couldn't afford!

We asked why the shutters at the front of the shop were down and they said they hadn't opened them for about five years, apparently their internet business keeps them so busy they simply don't have time to deal with off the street customers. I must admit when I saw the above photo it did give me pause for thought as it doesn't exactly look like the kind of place you'd want to drop £3000+ on a watch (indeed Iconic list watches on their website that exceed £500k!). Appearances are misleading though and the shop is very nice inside, it's just that any shuttered shop looks less than appealing, which is good if you don't want passing trade I suppose...

The staff were very welcoming and friendly and we mentioned that the owner of the The Spread Eagle had been wearing a Rolex (it turned out they had sold it to her). My watch was unboxed and presented to me for approval and then the owner showed me how to adjust the strap. All in all it was a very pleasant experience and I left feeling very happy with my decision (and my watch).

A few days later I had an email from Iconic asking me to rate them on Trust Pilot (which I did), in return they furnished me with an insurance valuation for my new watch for free. I was quite happy to do this as I had nothing but good things to say about them and I will definitely use them again in the future, and would recommend them to anybody who is thinking about using them but is worried like I was. Sure it may be slightly frowned on, but £700 is £700 at the end of the day and that goes a long way towards my next purchase.
Posted by Robert Carrier at 09:31