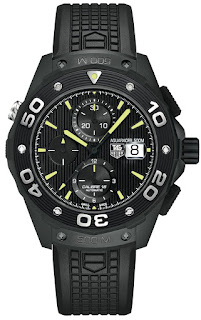 For the last couple of years I've regularly seen this watch (and similar ones, some with the date on the left hand side) for sale at big discounts in the TAG boutiques in Chester and Bicester. On this particular occasion they were offering this model at a huge saving, down from £4000 or thereabouts to £1850.

Nigh on 55% off a brand new TAG is not to be sneezed at and I did strongly consider purchasing this one, but in the end I just wasn't sure enough about it. Even now when I see them I still can't quite make up my mind about it, which probably means it was the right choice not to buy one. I really like the colour scheme, I am very keen on black and green, but to me it's not bold enough. The black could be be blacker and the green should be much bolder in my opinion, but as I've said before my choice of black and green would possibly be a bit too strong for most buyers.

Also of course, I already owned the Aquagraph which is not dissimilar, yes this one is black PVD coated and so it is aesthetically different, but essentially it is a chunky 500M diver - albeit one with lesser specifications than the Aquagraph. But that didn't stop me trying it on of course, and it was okay, but somehow it didn't really look like a £4000 watch to me. I paid £2,100 for my Aquagraph and the list on that when it was being made was about £3000 I believe and I can't quite see where the extra £1000 is coming from. True the Aquagraph stopped being made quite a while ago and if it was still in production it would probably be at least £4000 now, but somehow despite this watch's size it lacks the Aquagraph's 'presence'.

It's a shame because I like the individual elements of the watch but it seems to add up to less than the sum of its parts when viewed as a whole. I can't remember what the clasp was like as it was quite a while ago that I tried this one on, I do quite like the strap and wonder if it would fit the Aquagraph?

I'm guessing (given the discounts and the number of times I've seen it in the boutiques) that this one hasn't been the most successful of TAG's products, but if you snagged one during the period they were shifting them for £1850 then you probably got yourself a big chunk of watch for your money.
Posted by Robert Carrier at 16:37