ON THE WRIST: SLR Series 4 Chronograph 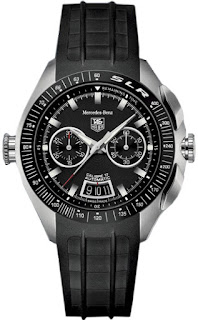 When I first started to really get into watches and TAG Heuer in particular, this was one of the first watches that really caught my eye. I think it was partly the strap that did it, that louvred effect is very cool and very reminiscent of the air vents on the actual Mercedes SLR that this watch was created to celebrate.

This watch was made in a limited run of 3500 (somewhere around 2008 I believe), and again it's somewhat surprising to me to find one brand new 8 years later. But then this watch is probably not for everybody, for a start it's quite a big watch so those with slim wrists would probably find it a bit large and the styling is quite unique and different to any other TAG Heuer and so may find a more select audience of admirers.

It was interesting to try it on and on the wrist it didn't seem quite as unwieldy as I feared it might have been (this was before I bought my 45mm Carrera Heuer 01), this may be partly because the pushers are set into the case rather than protruding from the case and so the size taken must include them. Still, don't imagine this wears like a 43mm because it certainly doesn't, this is a chunk of Switzerland alright.

Unfortunately I can't remember the exact price, I think it was somewhere between three and four thousand pounds, certainly more than I was willing to pay for it anyway. Personally I still haven't really made up my mind whether I like it or not. It's an odd one for sure and I wonder if I might not find it more appealing if the case was a little smaller relative to the bezel?

It's slightly disappointing to report that the watch features a solid caseback, for this amount of money I would have thought a glass back would have been in order, especially as you can get some very nice display backed Carreras for under £3000. But still, I'm sure there are some people who won't let that put them off as this is exactly the kind of watch that will have it's own limited fan club who believe it to be the best watch TAG Heuer have ever made and more power to them. But it's not one I will be buying any time soon I don't think.

http://www.calibre11.com/tag-heuer-slr-series/
Posted by Robert Carrier at 00:31