FEATURE: What is it About Omega Fanboys?

Yesterday, I was minding my own business, watching and commenting on a You Tube video about the Monza 40th Anniversary, when out of nowhere comes some buffoon who proceeds to address me and says: "That's a nice looking watch, but it will never come near the engineering of an Omega."

For clarity's sake, I'm not 100% sure, but I believe he was referring to the Carrera Heuer01 rather than the Monza. Which makes some difference because the movement in the Monza is an ETA and the Heuer01 is obviously TAG's in house movement.

I must admit I did see red and gave a rather curt response, but hey... what was the point of that exactly. Why bring Omega into the discussion at all? The guy then commented that he wasn't an Omega fanboy and didn't own an Omega (you may remember my recent post where I pointed out that people who say TAG Heuer are an awful watch brand tend never to have owned one... but all know someone who does and it's terrible) but thtat he was just 'stating a fact'.

Is it perhaps that Omega fanboys are slightly uncomfortable because they are basically wearing a watch that really, really wants the respect that Rolex gets, but doesn't quite cut it...?

No wait, hear me out... everyone knows Rolex, even people who don't know watches at all know who Rolex is and basically what they stand for. Rolex is like Coke, Ferrari and Nike. Omega isn't. Breitling isn't. TAG Heuer isn't. Even Patek Philippe isn't. Not in the world at large, among the watch geeks it's given massive respect, but out there - hardly anyone has a clue what a Patek Philippe is.

I think what it is, is that Omega fanboys are so angry that their brand doesn't get the respect that Rolex does, and that they know trying to vent their frustrations against Rolex is pointless (because frankly Rolex fanboys are so not bothered, the only thing that gets a Rolex fan excited is a new line of red text on a Submariner) they look for someone else to take it out on, and guess who that is?

What about Tudor? Well, good as Tudor are they aren't really worth fighting with because they are 'just' a cheap Rolex after all, but TAG. TAG Heuer have the audacity to operate in the sub-£1000 price bracket right up to the £70,000s. How very dare they?

Okay, look, before I go any further I want to say this, I really don't have a problem with Omega at all. I really don't like the classic Speedmasters, because I'm not into the vintage look. However there are a few Omegas I do genuinely like and would love to own.

First of all, I like this Seamaster Planet Ocean 600m Deeep Black Co-Axial Master Chronometer GMT (seriously, that's what it's called). 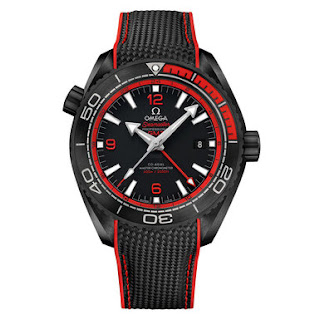 I was also quite taken with the ceramic Dark Side of the Moon Speedmaster, but again it's £8000+ 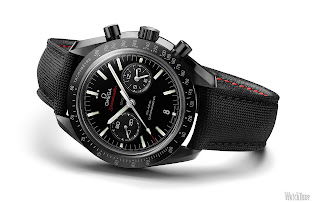 And lastly I really, really liked the Snoopy Limited Edition Speedmaster, but again, huge money and sold out before you could ever see one, and now £12,000+ if you can find someone selling. 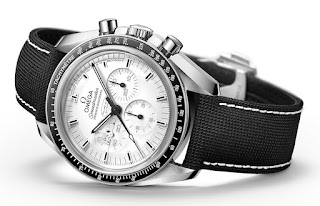 So my issue isn't with Omega themselves, I do find their watches generally a little boring, but then I find Rolex's range very boring indeed... but Rolex are all about heritage and optimisation and I admire their commitment to what they do. Omega on the other hand seem a bit unsure about their focus. Do we need another Speedmaster LE? Hell no, but it's not hurting anyone so make as many as you like. But please shut up about the moonlandings... we know already. And the only Apollo missions anyone cares about are 11 and 13, everything else is irrelevant (though Federico sure loves his super rare Apollo 14 Speedmaster).

So, I got a little sidetracked there... so who's left for the Omega fanboys to take out their frustrations on? Longines fans (nobody cares), Oris fans (too insignificant), Mont Blanc fans (too specialist), Grand Seiko fans (way too devoted)... so that leaves those noisy buggers with the red and green shield logo. Many of whom are already at odds with their own brand because of the whole 'Heuer' / 'TAG Heuer' thing and their desire for more vintage and vintage inspired pieces and the whole confusing 'Avant Garde' watchmaking thing.

What's more they are an easy target, look at all those nasty quartz powered Formula Ones cluttering up the jewellers window, never mind that they are entry level pieces aimed at people who want a luxury product but can't (or are unwilling to) afford thousands of pounds for a piece of 'redundant' technology (and also people who can afford higher end pieces, but who find them fun).

Do you know what my Omega fanboy's parting shot was?

"I don't buy anything in your price range, that's for the proletariat."

So what is it, why are Omega fanboys so hot under the collar about TAG Heuer, and why are they so insecure about their own choice of brand?

It seems to me that TAG is a bit like Ford, they make cheap cars and they make expensive cars. Omega is a bit like Audi, it's doing really really well, but it actually wants to be Mercedes, but there's only one Mercedes and that's Rolex. Breitling is a bit like Volvo, it does what it does in it's own funny way and no amount of sniggering is going to change any of their fans minds.

I think perhaps, Omega man is most likely an Audi driver, and he probably can't believe when someone rocks up beside him in a top of the range Ford, and can't help himself from criticising the owner's choice of marque. Never mind that the Ford is packing a lot of features that the Audi driver doesn't have for the same money, and indeed can't get without spending a hell of a lot more money.

Okay, I'll stop now before I alienate anyone else. Again I don't have a problem with Omega watches, I'm sure they're very good watches (although I did hear a horror story about some Omega movements from a man in Goldsmith's not so long ago...) but then they should be because they cost roughly 50% more than for a comparable TAG Heuer watch! I think next time someone drops their Omega B/S on me in a comment that will be my retort.

Email ThisBlogThis!Share to TwitterShare to FacebookShare to Pinterest
Labels: Feature