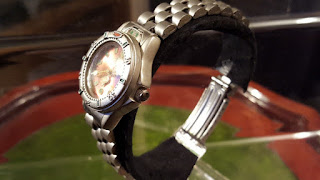 As we all know, shopping on eBay for luxury goods is something to be approached with caution. Often the knowledgeable buyer can spot a fake a mile away simply because the item has clearly never been made, but with TAG's propensity for making special versions of otherwise standard watches (slightly modified dials for sale in specific markets, with fish, playing cards or city skylines spring immediately to mind) and not really telling anyone about it, sometimes one needs to do a little research to clarify the authenticity of the piece.

And then there are the real gems, watches so unbelievably bad that they are hilarious. Here then is one of those watches. At first it just looks wrong, but the more you look at it the more wrong it becomes... 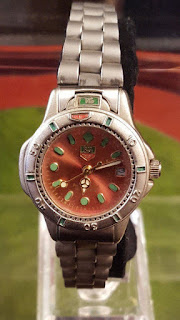 The copper dial is unusual, but on it's own, not enough to be dismissed out of hand, but the green applied markers, look all kind of wrong. Then there's the bezel, it looks like it's made of pewter or possibly plasticine. Then there's the whole 'striaghtness', or rather lack of it. Sure the bezel isn't centered, but the whole dial is wonky.

Then there's the bracelet and clasp... how long is that thing? 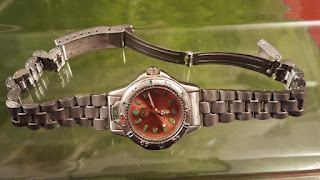 And look at the thickness of those links, truly exceptional workmanship...

I must admit, normally I'm the first to hit the 'Report' button (not that it always does any good), especially when I see something I fear might be good enough to trick the unwary out of serious money. But this is so bad, I simply couldn't be bothered... not only is it obviously fake, but it's hideous, and frankly anyone who finds this attractive in any way at all deserves to lose their money. Mind you I can't see it climbing too much from it's £5.99 asking price anyway, which in itself should be a red flag!
Posted by Robert Carrier at 10:51