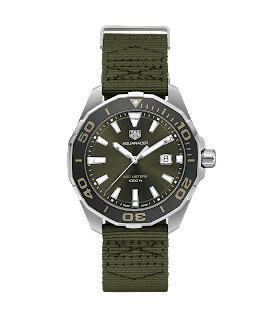 TAG seem intent on blowing their veritable load pre-Basel this year, first we had the twelve new Heuer02 Carreras and now we have a new quartz powered 300M Aquaracer which is available in 'some' countries and also as a pre-sale online.

Presumably this is a 'Special' edition, rather than a 'Limited' edition like the Khaki Calibre 5 released last year (alongside the camouflage Calibre 5) and while the render above isn't terribly engaging, the photograph below makes it look a lot more interesting.

I'm not sure, but this 43mm Aquaracer could be the first quartz model to feature a cyclops. I'm sure the red, blue and black models released last year didn't have the dreaded goggle eyed date window, but there's probably something really obvious that I'm overlooking. 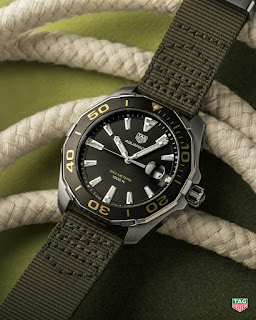 I do think the dial on this one is a great improvement on the Calibre 5 Khaki, for one thing at certain angles the TAG logo completely disappeared on that one leaving what looked like a huge piece of empty dial. Also the bezel on this one looks rather classy with what appears to be gold markings, but I'm not sure whether they might look a little more 'green/gold' in the flesh.

As usual though, we have the horrible and massive silver retaining bars on the NATO strap, which is a shame, because otherwise the strap looks quite nice and fits in with the overall scheme very nicely.