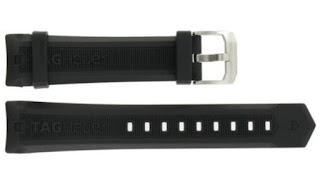 Tom at Bicester Village kindly offered to order me this strap and emailed me when it arrived after a few weeks and so today I made the journey to Bicester after work to pick it up. Unfortunately Tom was in a meeting when I arrived so we didn't get to meet, but I was greeted by Liam instead, who was another new face to me and another solid addition to the team it seems. Long term readers of the blog will know that in the past I haven't been overly impressed with the staff at Bicester, but I must say the current crew are excellent.

Liam was very friendly and helpful, and didn't hesitate when I pulled out my TAG Heuer travel case and asked if he could take a link out of the bracelet on my CAF1010 Chronotimer for me while I was there. We seem to share a penchant for watches that are slightly off the beaten track, but I was still rather 'alarmed' when he told me his favourite Grand Carrera was the diamond bezel GMT!

Since I bought my Calibre S Aquaracer CAF7013.BA0815 from Watchfinder last month, I've rather grown to like the bracelet. Initially my idea was to get the CAF7013 on the rubber and the CAF1010 on the bracelet (thus giving me the option of switching) but it didn't work out like that and I ended up getting both of them on the bracelets (the bracelets are basically the same save for the Calibre S having polished centre links). It made perfect sense to order the rubber strap, seeing as both those watches could use it and especially with the Summer on the way. 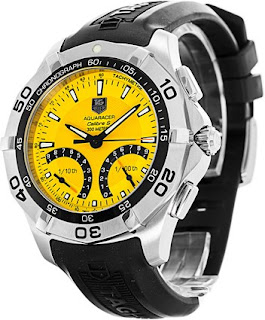 Since I ordered it I went back and forth, wondering which watch to have it put on. The thing was that since getting the CAF7013 I'd grown to like it on the bracelet much more than I thought I would, so in a way I was reluctant to swap it, but then I knew it looked good on the rubber because I had seen it before and obviously the yellow dial goes really well with it. I saw a photo of the Chronotimer on the rubber and it looked good too, but in the end I think it looks better on the Calibre S. The strap itself is very similar in design to the BT0714 and BT0717 I have for my Formula One watches, but with ends that curve and fit snugly into the lugs of the Aquaracer and fill them completely. I really like the way this strap looks on the Aquaracer, just as I really liked the way the rubber strap fitted on my 2000 Series. Having the fitted ends seems to make a huge difference in the feeling of quality and appearance of the watches and really gives it that luxury, bespoke feel.

The strap is definitely thicker than the slightly flimsy BT0714, but thankfully not as thick as the rather clunky BT0717, while the buckle and pin look pretty standard and possibly the same as one or the other. I didn't actually know the FT8011 would be vanilla scented and to be honest I'm not that keen on it. Liam assured me it could be rescented, which at least gives me hope that it will wear off eventually. I bet every time I open my watch cabinet now I'm going to get a huge waft of vanilla, oh joy...

I don't actually mind vanilla, but it's not a very clear vanilla, it's more a mixture of vanilla and wood (think Body Shop gift set!). I realise this sounds rather dramatic, and honestly it's not that bad really, but you can definitely smell it without holding it up to your nose, I just wish they offered cinnamon as an option instead. Ah well... maybe at Christmas?

The strap is a little stiff so far, and it doesn't seem to curve as well at the lugs as it might, especially considering I've got a pretty big wrist. But it's okay and it looks fantastic and I guess it will soften up with wear. I must say, on the way to Bicester I was still a bit reluctant to swap out the bracelet I've come to love, but once fitted I was glad I chose to put it on the Calibre S, especially with the Summer coming. Besides, in six months I can swap it back and it will be like having a new watch all over again.

Splendid chap that he is, Liam also put my strap into a rather nifty, self sealing TAG Heuer case for me. It's only shiny cardboard, but it will keep all the spring bars and end pieces safely with the main strap for when I need them again and looks much nicer in the cupboard than a plastic bag.
Posted by Robert Carrier at 23:53