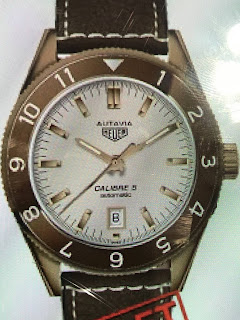 Before Bazelworld 2018 I only really had one prediction, and if you know anything about the watch world it wasn't exactly one which would cause a sharp intake of breath. Since Panerai launched the Bronzo bronze watches have been growing in popularity to the point where it was becoming strange that TAG didn't have on on their books.

So like I said, my one prediction wasn't exactly earth-shattering, and tchnically speaking... TAG Heuer haven't actually released their bronze watch yet. But there were a few things not launched at Baselworld that we still got to see, mostly thanks to Ace Jewellers Instagram account! There was the Autavia GMT and the three-hander Calibre 5 of course, both seen in photographs but not actually announced, and then there was this (above), which clearly shows a three handed Calibre 5 Autavia in bronze (on a leather strap).

Now I must admit, when I predicted a bronze watch at Bazelworld, I naturally expected it to come in the shape of an Aquaracer, because for some reason, bronze is automatically associated with diving (even though nobody's actually worn one of those helmets in a long time, or maybe they have, what the hell do I know about deep see diving?). We saw it with the Oris Carl Brashear Bronze, which celebrated the achievement of the first African-American to became a US Navy Master Diver (despite having one of his legs amputated), and latterly we've also seen the Tudor Black Bay Bronze along with some other limited editions such as the Black Bay Bronze Blue for Bucherer. 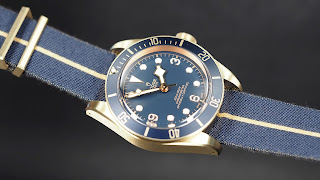 Now this one I actually quite like, but the problem is while it looks like gold now, eventually it will look grubby and patinated. But for some reason people love that, they want a watch that ages and takes on a grubbiness, they think it gives it character.... what's more people are even deliberately accelerating the process and putting chemicals on their watches to make them oxidise and change colour. 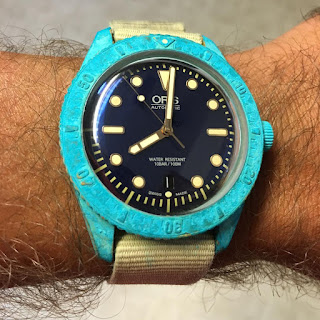 I'm sorry, but I really don't get this at all. To me that looks a total mess and I wouldn't go near it with a barge pole - but hey, each to their own!

So anyway, I anticipated a bronze Aquaracer, but of course what I didn't take into account was that the new range of Aquaracers are quite modernist in their styling, and so not really the ideal watches to bronzify, because all these other bronze watches are all playing the (slightly tired) vintage riff for all it's worth. On the other hand I did think the red bezel Aquaracer might go quite well with a bronze case, at least when it was new and the case still looked 'golden'.

So admittedly it never occurred to me at all that TAG might launch a bronze Autavia, because the Autavia isn't a dive watch*. But now that there's going to be a three hand version, it seems the Autavia's racing-chrono heritage is being thrown out of the window, so why not?

It's a bit of a conundrum, because it seems to me like the people who might appreciate a bronze TAG are exactly the sort of people likely to get very upset about the idea of a non-chrono Autavia, so it's going to be interesting to see how this one plays out. I suspect that perhaps TAG are looking to go head to head with Tudor for Black Bay business with the three handed Autavias, and if they are then they're going to have to price them accordingly - but then realistically there's no reason I can see why a Calibre 5 Autavia should be dramatically more expensive than a Calibre 5 Aquaracer. And perhaps, beyond the Calibre11 forum there might be plenty of potential customers who aren't died in the wool Autavia fans who won't actually care that the watch they are buying doesn't 'make sense'.

After all, at the end of the day, it's those people who buy watches 'just because they like them' that dictate the market, because they far outweigh the voices of those 'who know their onions'. In a way it reminds me of endless conversations I've had on Formula 1 forums with people who think their opinion matters more because they been watching the races since 1977, versus the huge mass of casual viewers who make up the vast majority of the actual audience. They don't seem to understand that 'purity of racing' doesn't count for much if the races are boring and the viewers are turning off the TV. Sure, pure racing has it's place, but it's not on a Sunday afternoon on Sky as a mass market event. If you want 'pure' racing then great, but that doesn't really gel well with sponsorship or public engagement. You can't have it both ways at the end of the day, and thus Formula 1 stumbles from one crisis to the next, endlessly trying to cajole the major players into giving up their historical advantages for the 'good of the sport'. 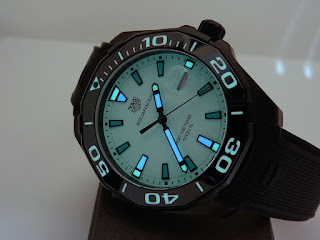 Anyhoo... to finish on a positive note, another picture that escaped Bazelworld was something that looks far more appealing (to my eyes). This white-dialed, black-cased, rubber-strapped Aquaracer certainly caught my attention, I wonder how long before this one is available on the High Street?


*Well, someone has since posted a photo on Calibre11 of an Autavia dive watch - so that's a turn-up for the books! Like I've always said, my knowledge of pre-TAG Heuer is very limited so I tend to take my lead from Heuer fans who I presume know what they are talking about - perhaps in future it would behove me to do my own research! :)
Posted by Robert Carrier at 15:04