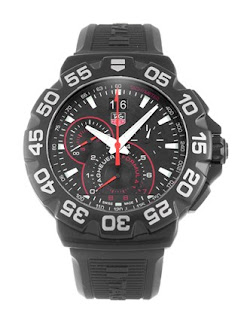 At first glance you could be forgiven for mistaking this for the Formula 1 Kimi Raikkonen Edition, and while there are some definite similarities, personally I think this is by far the nicer of the two. This is the larger cased Formula 1 with a diameter of 44mm and a 22mm lug width (hence the chunkier BT0717 strap in place of the standard 20mm BT0714). Functionally it's exactly the same as the aforementioned Kimi Raikkonen model, with the date at the 12 position and a quartz movement powering a 1/10th of a second chronograph.

As far as this particular model goes, I found the video below on youtube and was intrigued to find out more. So I did a bit of Googling and it turns out that 'Rabat' is a Spanish jewellers, evidently they had 500 pieces made of the CAH1012.BT0717 but had the back engraved with the company name and the watches numbered (which therefore made it a different watch, hence the CAH1013 nomenclature). 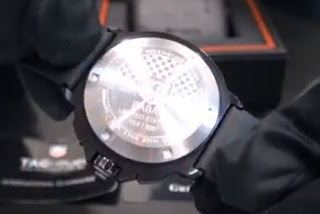 Not really sure that would make it either more collectible or valuable than the standard CAH1012 to be honest, at least outside Spain... and with the name only marked on the back-plate it seems a little bit too much of an 'afterthought' to add any real value or interest. If they had added the 'Rabat' name to the dial I guess that could have made it more interesting to some people, but as it is I don't really get it. 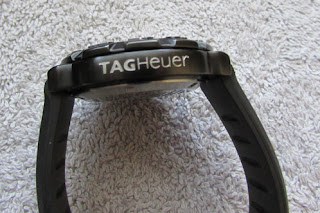 That said, it's a handsome looking watch, albeit in a size that's not going to suit everyone's wrist. This watch features the usual TAG Heuer engraving on the edge away from the crown, and if you are buying one of these I would advise checking that the ink is intact, because it seems par for the course for this to fall out sooner or later (as it has started to on my WAH1110 Formula 1).

Definitely one of the cooler looking Formula 1's of it's era, the standard CAH1012 can be found on Chrono24 for between £700 and £1000. I don't know as I would pay £1000 for it to be honest, even in unworn condition, but maybe if this is your dream watch then it's not completely outrageous..
Posted by Robert Carrier at 20:04