ON THE WRIST: A Trio of Grand Carreras... 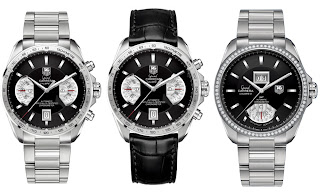 While visiting the outlet to pick up my new strap, a few things caught my eye. There was the Calibre S Links, of which there were two, they looked identical but were nearly £300 different. Liam told me the bracelets were different, couldn't see it myself, but I'm sure he's right. Also on offer was a nice Calibre S Formula 1 for £1200 on either a bracelet or a rubber strap. I must admit I was tempted to try it on, but in the end I decided not to because, basically it's an amalgamation of two watches I already own, and besides, I've kinda set my heart on a Grand Carrera now, which is where these three come in. 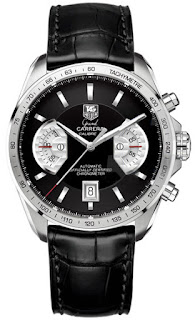 This was the first one I tried on, purely out of curiosity really, since I've pretty much made up my mind that what I really want is this watch but on a bracelet. And, well, if nothing else it kinda confirmed what I already knew deep down, that leather straps are not really me somehow. It very much reminded me of the strap on the Monaco 24, I'm pretty sure it's the same clasp but the strap had a different number so it's not quite the same. I didn't dwell on this because right away I knew it wasn't what I wanted so I moved on to the real deal. 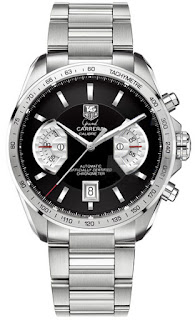 I really do like this watch and am currently exploring ways to get hold of it, it just looks classy, especially on the bracelet. I don't really have a watch like this in my collection, the classiest one I have is probably the 6000 Series, but these two watches are like chalk and cheese really. In a way I sort of feel like this would complete the high end of my collection and then I would probably only buy more affordable pieces. I mean, foolish thing to say perhaps... but that's how it feels to me at the moment. I would like a Monaco of course, but there aren't really any affordable options there and I don't really want to spend £2-3000 on a watch I sort of like for the sake of the collection. I'm too old to get into 'completism', it's not like there's a watch collection police - well there is but I'm not on Instagram. :)

I don't know, it's just a smart watch, and as soon as I put it on it felt right, so much better than the strap version. The only obstacle is the money really, this one is up for £3400, which is a chunk of money whichever way you look at it (and more than I paid for my Heuer01 Carrera let's not forget). Still, like I said, I am exploring my options - which will no doubt form the basis of a future post...

Lastly, because Liam said it was his favourite, I decided to try on the GMT version with the diamond bezel. I was only doing it for a laugh, but surprisingly, I actually really liked it. I know, I mean...! But it looked pretty fantastic on the wrist I have to say. 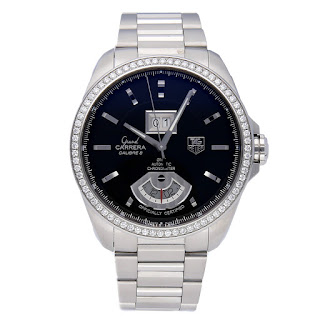 I've never really been sure about the single subdial Grand Carreras, and looking at the picture above I still have my reservations. But when I had it on my wrist I have to admit, it looked a lot better, and actually gave me pause to rethink slightly. The GMT's are cheaper to buy than the chrono models, quite a bit cheaper in fact, but on the other hand I don't want to settle for something for the sake of a few quid (actually more like a grand, cough!).

Undoubtedly the TAG logo looks better at the 12 position and the double sub dials give the CAV511A a much more pleasing symmetry, but this is still a nice watch. So what about the diamonds? Well, honestly I didn't mind them, I mean they add a ton of money to the watch, which I personally couldn't justify (this was about £5300 IIRC) but, they are actually very tastefully done and while they are obviously 'blingy' it didn't feel like I was wearing a 'rappers' watch. I don't think I'll ever own a watch with diamonds on it, but if I had the money, I wouldn't turn my nose up at this (and I did just notice that Watchfinder have one pre-owned for £2700), and I kinda hope Liam gets to own one of these one day.

So what did I learn? Well, clearly the CAV511A on a bracelet is the one for me, but I've certainly adjusted my opinion of the GMT models and I noticed there was also a single subdial running seconds model (which is even cheaper!) but that one is only 40.5mm in diamater whereas the chronos are 43mm and I'm not really sure about that. Still it's all good knowledge, and at least I can definitely put the idea of a leather strap GC to bed now.