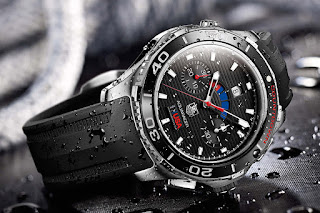 Regatta watches play quite a small part in TAG Heuer's history, but they've been around for quite some time. Even back in the Heuer days the company was making sailing watches, including this rather cool 134.601 with a black PVD case. 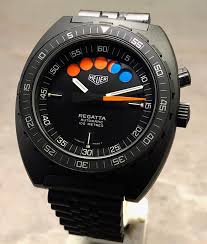 This watch is actually currently for sale in mint condition on 'MandBWatches.com', for the sum of $5600... which is probably quite reasonable given Heuer's rising stock in the vintage market of late. It's a nice modern size too, which suits me (42mm) and don't you just love the way that orange and blue pops against that black dial. Awesome, probably my favourite Heuer yet! 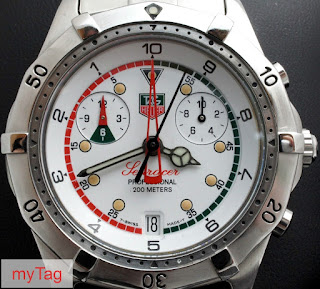 The watch is described as being 42mm including the crown (I wish people would measure things properly) which sounds quite okay for a 'modern' wrist like mine (7.3/4"). I must admit I am rather tempted because I think the dial is really nice and I love all the green and red laid onto that crisp white dial.

A quick squint at the Calibre 11 article linked below suggests that to activate 'Regatta' mode one gives a long push on the upper chrono pusher. This drops the left hand subdial into the green portion as an indicator and then the red hand commences it's ten minute countdown. Once complete the watch returns to it's normal function and the chrono starts itself to measure the time of the race itself.

Apparently the watch was also available with a black leather strap (CK111R.FC8117) and both watches are said to have been supplied with an additional nylon strap for wearing over a wetsuit.

I've read in at least two separate places (including Calibre 11, which is usually spot on) that there was also a Searacer based on the S/EL and I feel like I've seen it, but for the life of me I cannot find a picture or a reference number anywhere.

Next up came the Link models, these were available in three dial colours: black, blue and silver.

As you can see from the photographs, the blue and silver dial variants came on a bracelet with alternately brushed and polished links, whereas the black dial model's bracelet features only brushed links. As far as the dial size goes, from various sources I'm reading that the case measures either 40mm or 41mm, or 45mm with the crown and given that the crown does look fairly substantial on this I'm guessing it's probably not far off.

All three seem to sell around the £600-750 mark in good condition, though I would have thought the blue dial might attract a slight premium over the other two. 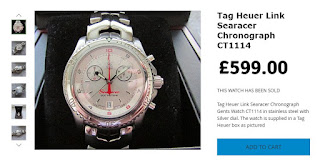 If I'm honest I think I prefer the 2000 series version, at first glance these look like standard chronographs, whereas with the original Searacer it's pretty clear that something's up right from the start. Which is probably why the next watch caught my eye, the CT1118.BA0550 Oracle Racing Edition. 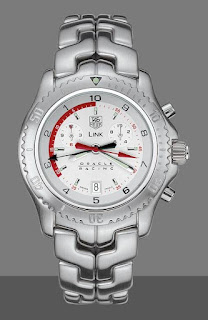 I posted about this recently and I'd still like to actually see one of these to see exactly how it looks in real life. I'm still slightly bemused about the black dial version which is very hard to find out anything about, indeed all I can find is this one single picture... 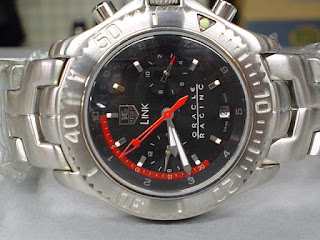 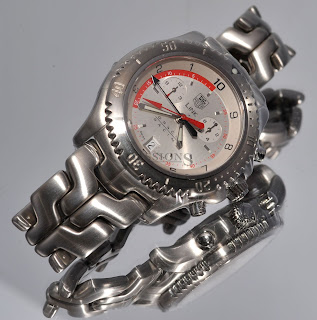 It's quite annoying and it puts me off bidding for one of these on eBay or something because I really need to see it in the flesh to figure it out. I do think this one looks better than the previous version because it's clearly not a standard chronograph. They've taken away the silver ring around the subdials making them disappear into the dial more and that red stripe up the left side surely gives a clue that this is something out of the ordinary.

Moving on we come to the Calibre S Regatta watches, which were launched in 2005. Again at first glance you could be forgiven for thinking these were standard Calibre S's but on closer inspection the countdown bezel gives the game away. 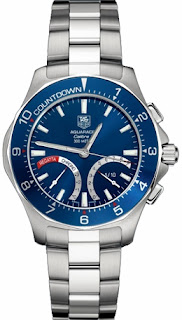 This was intially available in two colours (Blue - CAF7110, and Anthracite - CAF7111) and both were offered with either the steel bracelet (BA0803) or a rubber strap (FT8010). A year later in 2006 TAG launched a new limited edition variant of the Calibre S Regatta to celebrate their collaboration with the 'China Team' sailing operation.

All these watches were 41mm (which I'm surprised about as my own Calibre S is 43mm). 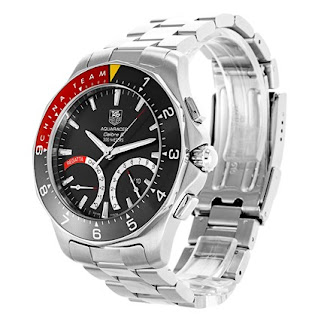 These watches continued to be part of the catalogue for a couple of years before being dropped, and it wasn't until 2011 that a new Regatta watch was released. Perhaps producing 2000 pieces of the Team China edition was slightly optimistic as these watches are still around in the outlets twelve years after being released! 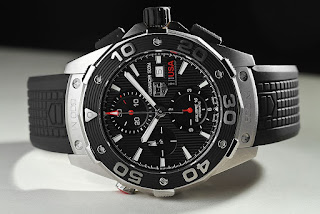 In truth, 2011's watch wasn't so much a Regatta watch as a Calibre 16 Aquaracer with a logo on the dial... which is, not that interesting really, although it's quite a nice looking watch. I have a slightly odd relationship with these bezels, sometimes I think they look interesting and different and sometimes I just think they look terrible. I do like the rubber strap though and the pinstriped face is a neat look. 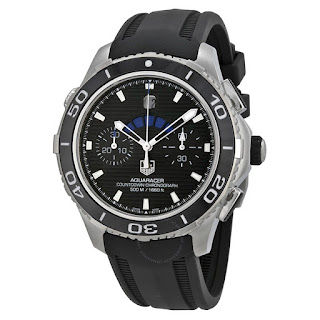 This was released in two versions, the standard version shown above and the 'Oracle Team' version shown below. Both were available on either the rubber strap (FT8019) or the bracelet (BA0833). 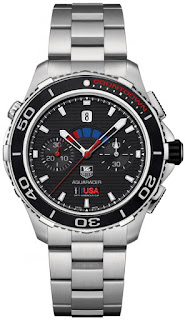 Again, I've seen these in the outlets, so they probably weren't the best of sellers and while I kind of like their general look, one thing that kind of disappoints me is that those 'Regatta' counter squares don't flip or something. I may be asking too much, I don't know how technically challenging that would be, but I've seen a Louis Vuitton Regatta watch which does that....

The Americas Cup, and sailing in general, is something I know very little (indeed nothing) about. But I gather the competition has been in a state of some disarray in the last few years with teams pulling out of it left right and centre as various rule changes have been brought in costing teams huge amounts of money in wasted development. 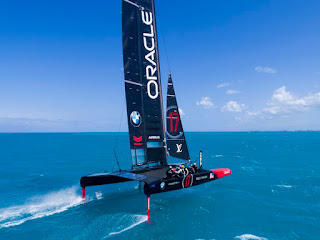 The race was last held in 2017, where the holders 'Oracle Racing' lost their title to the Emirates team. As far as I can see there doesn't seem to have been any TAG Heuer sponsorship on the boat, and I'm certainly not aware of any Regatta watches that have come out since the CK211A/B's.