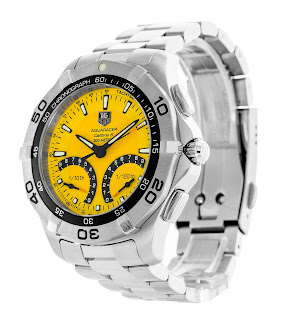 Long term readers may remember that I almost bought this watch (on a rubber strap) last year from Bicester Village, but in the end I decided to buy by CAU2012 Formula One instead, and then of course it disappeared never to be seen again.

Once I decided that I wanted one of these I enquired with Tom at Bicester Village, but unfortunately he was unable to source one for me. So it was back to eBay which didn't offer up much... there were two available, one from Japan with some damage to the upper left lug and scratches to the bezel and one other which was about £1250, but again with significant scratches to the bezel.

While I wanted one, I wasn't about to buy one that had a damaged bezel because I know it would irritate me and I would end up having to shell out for a new bezel sooner or later. Then, it occurred to me to try Chrono24, which is a site I don't really look at. Instantly, there it was, being sold be... Watchfinder.

Sure enough I go to the Watchfinder site and there it is, they must have literally put it up in the last couple of days because I'm always looking on that site. And as luck would have it, this week they have a 'Make us an Offer' thing going on.

To be honest, I would have happily paid the £1275 it was listed for, but I thought I might as well save a few quid if possible. So I offered them £1150, which I thought was reasonable without taking the Mickey, and my offer was accepted.

So yesterday, as it happened, my wife and I were off to London to view the Ferrari 'Under the Skin' exhibition at the Design Museum and also to see 'Massive Ego' playing at the 02 Islington Academy, which gave me the perfect opportunity to fetch my watch from the tiny store on Avery Row.

Also, my wife had been looking at an Omega Seamaster on the Watchfinder site, and so we arranged to view that at the same time. Unfortunately, it looked green in the pictures, but in reality it was a very insipid blue and honestly it was hard to see the dial because the colours were so weak, it really was one of the dullest looking watches I've ever seen - and I'm not just saying that because it was an Omega - honest!

Like an absolute rank amateur, in my haste to purchase, I failed to notice if there was a box and a manual, and once the sale was processed the listing was gone so I couldn't tell. So, since I was going to a gig I decided to wear the watch and if there wasn't a box then at least I wouldn't have to carry it around with me.

We arrived at the store and were met by a nice guy (I didn't get his name) who then promptly disappeared off for some time to find the watches. We feared the worst and expected him to say they'd been sent to Canary Wharf, but in the end he came back with them and all was good. My wife pretty much took one look at the Omega and decided against it, while I inspected my new purchase closely.

There is one little ding on the bezel just on the edge of the black ring, right underneath the lume pip. At first I was bit annoyed, but after wearing it for a couple of hours I reasoned it really wasn't that noticeable. I really have to get over my hang ups on 'perfect' watches!

Watchfinder did have a pristine box and a manual (the manual is more important here, believe me) and they also gave me a very smart Watchfinder branded dust bag to keep them in! Unfortunately they couldn't shed much light on how to operate the watch, our man asked the other guy in there for some guidance but he said that the Calibre S was the one watch he'd never been able to get his head round. Indeed, this is the only watch I've ever owned with instructions printed on the backplate (not that they mean much). 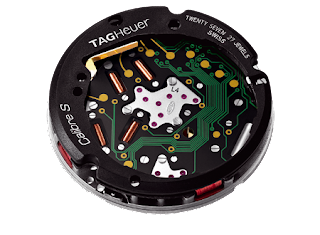 As it happens, I did know how to operate the chrongraph and I played with the watch a bit on the train home. To initiate the chrono, what you do is press the crown in, this sets all three hands to the 12 position and the other hands to zero. You operate the chrono as you would on most normal watches, top pusher for start and stop, bottom pusher for reset. I presume it's a 12 hour chrono since it uses all three hands, and when you stop it the two small hands at the bottom jump to indicate 10th and 100ths.

You can leave the chrono running and revert to standard time as well, which is pretty cool, and when the watch is in time mode the small hands indicate the date. Clever stuff! Unfortunately the hands were showing the 22nd all day yesterday so the watch clearly needs to be reset, which is why I'm so glad I've got the manual. This is a perpetual calendar I believe so the watch needs to be told what year it is, I'm sure this will be fun!

I quite like the watch on the bracelet, it was pretty comfortable wearing it all day yesterday, but I do have the rubber strap on order because I think it looks great with the yellow dial and, of course, it will also fit on the chronotimer I bought last week. Wow, it seems a lot longer than a week since I was driving up to Sheffield...


All in all, I'd have to say I'm pretty impressed with Watchfinder's service so far, and I have their warranty for a year so hopefully, if I can get this watch set up properly, all shall be well!
Posted by Robert Carrier at 12:38