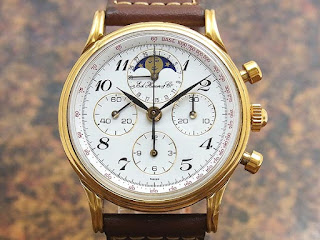 Unless you are familiar with the history of TAG Heuer and Heuer, you may be surprised to learn that the watch pictured above was available from the company as late as 1988. This was a time when the line-up was a bit of a mish-mash of old Heuer models like the 'Titanium' and 'Airline' which were being sold alongside the new, very 'TAG Heuer' Formula One range as well as other crossover favourites like the 1000, 2000 and 3000 series (for my sins I'd love a 3000 series, they are so gloriously 80s, but far too small for me to ever wear).

It's kind of funny to me that in these days of endless 'heritage' re-issues and a constantly backwards looking watch industry digging out anything and everything they can to celebrate and turn into an 'Anniversary' model, that most people have no clue that these watches even existed. Let's be honest, if TAG Heuer announced a moonphase watch at Bazelworld people would be scratching their heads and thinking 'where in the hell did that come from?', and it would be one thing to say 'well, Heuer made these back in the 1950's (I have no idea if they did), but few people would believe that TAG had sold such a watch in the last thirty years. 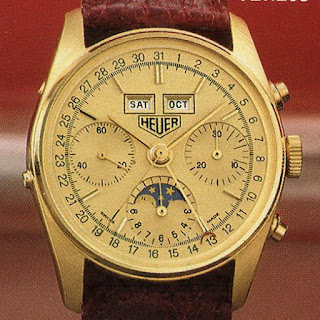 Oddly, it's possible to find examples of watches such as the 321.208 above with either the classic 'Heuer' logo or the 'Ed Heuer Co' script on the dial. I wonder if perhaps it is the later versions that were changed to 'Ed Heuer Co' since presumably TAG didn't want to sell watches with 'Heuer' on the dial and they thought (quite rightly) that the red and green TAG logo would look horribly out of place.

Since I knew so little about these watches I Googled them and immediately came across a 188.205 for sale on Chrono 24. The watch looks in immaculate condition (it is listed as unworn) and is being offered for sale for 2100Euros.

The watch is 34mm in diameter and contains a Lemania Calibre 1883 movement, the lens is plexiglass and if you look closely you can see that the brown leather strap is in fact stamped 'TAG Heuer' (which seems a bit odd if I'm honest).

I also managed to find a 188.215 on 'Global Rakuten' for a much more affordable £1337. It seems that the watch itself is largely the same as the 188.205, apart from the way the strap attaches to the case. On the 188.205 you have the standard lugs you find on most wristwatches, whereas on the 188.215 you have the kind of a arrangement you tend to find on watches that either are, or allude to being, pocket watches for the wrist. This listing adds the informantion that the movement is hand wound and also that the watch is 'recommended for indivuiduals'... I guess that was lost in translation. 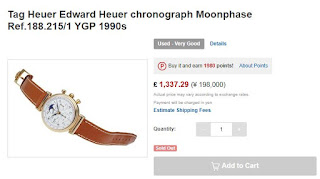 I've also managed to find a 721.508, this time on 'Watches-for-sale-online.com', but if you want one of these you're going to need to find a bit more cash. This one is listed for sale at £8250, which I suspect is partly because it has the classic 'Heuer' logo on the dial rather than the Ed Heuer Co script. 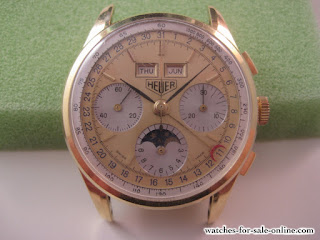 This one has a 38mm case and is 47mm lug to lug, the case is 18k gold and the lug width is 19mm, it's described as being in 93% condition - which is pretty precise, and is supplied with a crocodile strap (it doesn't say whether the strap is original or not). 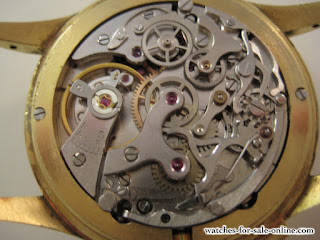 Lastly, I discovered that a 721.208 was sold by Bonhams last June for £14,375. This one came on a bracelet and measures 36mm across the face. Personally I think this is by far the nicest of the four watches and (leaving aside the size) would definitely be the one I would choose to wear. I think the full gold dial looks great, especially with the blue moonphase complication. 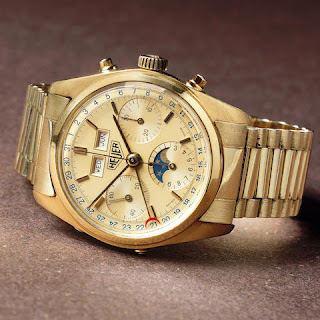 I've also found another example that sold last year, this time on a strap. This was sold by Christies last November and was dated to 1986. This was put up with an estimate of 70-100,000HKD and achieved the top end of that (£9020). But I'm really struggling to find one with the 'Ed Heuer Co' logo to compare prices. I can well imagine that these are rarer, but I'd wager the lack of the classic Heuer logo would compromise the price significantly. Funnily enough I did come across someone asking on an eBay forum if their watch marked 'Ed Heuer Co' rather than TAG Heuer was a fake though... so they're obviously out there!

I'm pretty sure it won't happen, but I'd definitely appreciate a re-issue of the 721.208 either in gold or stainless steel. I think it would be a nice addition to the range and if it was upsized to 39mm it would be big enough for me but not too big for the proper Heuer fans.
Posted by Robert Carrier at 14:10