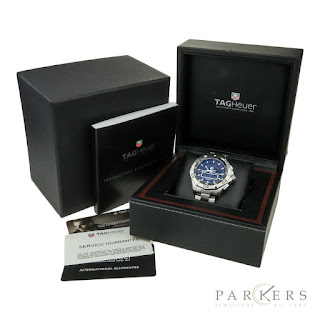 Long time readers of the blog will know that for some time now I've been mulling over the prospect of saving up for and purchasing the Monaco 24 CAL5113 from one of the TAG outlets here in the UK. The price has fluctuated from £6,000 down to £4,300 and is now back up at £5,100. Up until a few weeks ago... well actually, up until maybe two weeks ago that was my long term plan, I had about £2700, and a way to go, but that was the plan.

But then something changed, I visited the Bicester store and tried the Monaco on again and while I do like it, I just don't think it gets me going enough to shell out that kind of money for it. I know it's a bargain at that price, but being a bargain isn't enough when you are talking in these terms. I spent the money on the Heuer01 skeleton because the moment I saw it, I knew I had to have it - that's just not the case with the Monaco. I like it a lot, but... it's not going to give me sleepless nights.

So I started weighing up my options and bought myself a nice 6000 series for a pretty small amount of money and then somehow I started thinking about Aquaracers again, and in particular the yellow dial Calibre S. Searching eBay for these (nothing much at the moment) I came across the CAF1010, another model that I'd never actually seen and the more I looked at it the more I liked it. A while back I started pondering the possibility of getting one of those Breitling Aerospace watches, and this has a similar aesthetic, with the digital readouts etc. 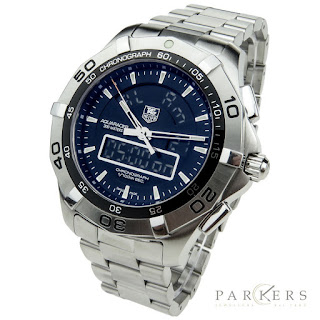 I also kind of wanted to get some more bracelet watches into my collection because I do have a slight excess of rubber straps, and while I'm not averse to the idea of getting a FT8011 for this, since I'm likely to pick up the CAF7013 yellow dial with that strap, the opportunity is there to mix and match. Or if I end up finding that on a bracelet, then maybe I'll order an FT8011 to share between them.

I found one seller on eBay selling for £995, which seemed a fair price given that I'm sure this watch would have originally retailed for well over £2000 and given the condition (and accepting that you pay a premium for buying from a jeweller). So I checked out the seller's own website (Parkers in Sheffield) and found the same watch £50 cheaper (we all know how this works, eBay fees etc..) and shot them an email.

Because I didn't know the seller I didn't want to buy through the post if I could help it, so I waited the week hoping no-one else would buy it and on Friday I sent them another email confirming my intention to visit on Saturday morning. So this morning I got up nice and early and made the journey up the M1. It was pretty smooth save for the sat-nav trying to send me down a bus lane and I eventually (more by luck than judgement it has to be said) found myself on the road adjacent to the road where the shop is.

The shop is closed on Saturday morning and you have to ring to get in, which is fine, but because the place is very small you do have this slightly uncomfortable experience of having people trying to get in the shop and being able to see you standing at the counter. I mean, it's not a big deal, but it might take the shine off if you were buying wedding rings or something. 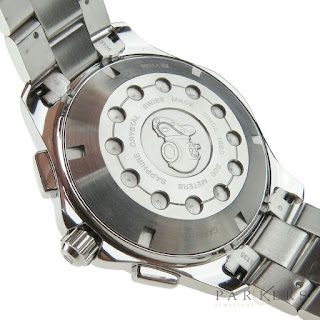 I don't know about you but I always get this slight nervousness when going to look at buying another watch. The sensible part of me is tutting in my ear, 'You don't need another one, it's a waste of money' while I'm trying to keep a clear head and not buy something because 'it's there' if I don't really love it.

And this was the sticking point I think, and the reason I wanted to go and see it before buying. The photos looked great, but I wondered if it might look different when I actually got it in my hands. I think it did look a little different, but in a good way. The photos gave me a 'that looks nice' feeling, whereas the actual watch was more like 'Wow, that's gorgeous!'. I also never noticed the orange tip on the second hand until I actually saw the watch so that was a nice little surprise. 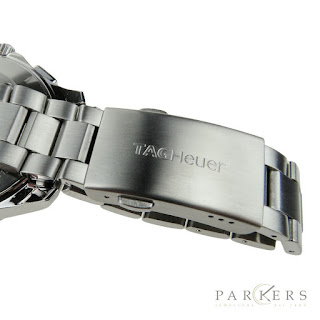 Steve at Parkers was personable and easy going and though he couldn't explain the functions on the watch he did assure me he had gone through the manual and checked it out. The watch had also been serviced by TAG at the end of last year and still had the service card alongside the original warranty card, inner and outer boxes and hanging tag, not to mention the all important manual (about half an inch thick!).

The inner box is a bit tatty, and I might pick up another one from eBay to replace it, but the watch is in great condition (save a few very minor marks here and there) and the sapphire crystal is absolutely perfect with that same purple-blue sheen that my F1 Kirium has (from the AR coating). 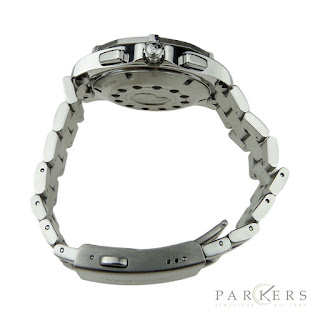 The bracelet fit my 7.5" wrist perfectly (yes I measured it recently and it seems to be half an inch bigger than I always thought it was - which probably explains my thing about watches being too small), and it does have some micro adjustment holes on the clasp (unlike dear old Aquagraph of course). So I flexed my plastic and tootled off back down the M1 home, very happy my latest acquisition and looking forward to getting my mitts on a CAF7013 as soon as possible.

I think it's safe to say that I've got over the automatic bug, a while back I was thinking that I didn't want any more quartz pieces and that I wanted to focus on automatics. That's fine, but they are so much more expensive, and really for me it's not about the movement so much as the watch itself. Generally speaking there aren't too many watches you can buy where you can get an identical model with or without an automatic movement - for obvious reasons... but, for example, while I think it's acceptable to pay out for something like the Heuer01, I don't necessarily feel like shelling out £2300 for an Aquaracer. I think, broadly speaking, I've come to the conclusion that I'd rather have two or three quartz watches for the price of one automatic and potentially in the case of the Monaco that could be more like five or six... but we'll see, opinions can (and probably will) change!
Posted by Robert Carrier at 16:53