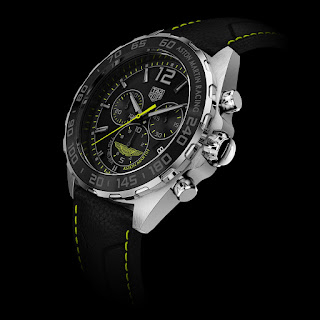 You might rightfully be forgiven for wondering just what the hell is going on with TAG Heuer just at the moment, with Baselworld just around the corner what on earth are they doing constantly dropping new models? Have they got so many new models they need to get some out pre-Basel, cos that's how it's looking just now (and let's hope so!).

So a couple of weeks back we had the new black dial Formula 1. It was a nice enough piece, but not mind-blowing, being just a variation on the Red Bull edition and, on reflection, not quite as nice in my opinion (which is odd because I usually favour black over blue - maybe the 6000 series wasn't such a fluke after all).

So this morning I was totally shocked to find a post on Calibre 11 heralding the launch of two new watches, one of which I like so much it's causing me to rethink my watch buying plans! Yep, you heard that correctly.... looks like the yellow dial Calibre S Aquaracer will have to wait (although truth be told, there doesn't seem to be any about just at the moment) - pending sight of the Formula 1, because while it looks fantastic in these pics, well... you know, it might not look quite the same in the flesh. 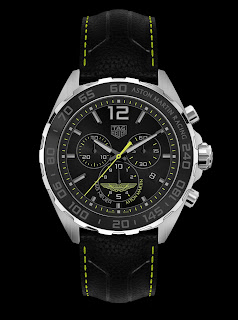 I really hope it does though, because I love the yellow/lime highlights on this dial and I really love the matching stitching on that strap. Can't quite work out what that strap is made of as yet, maybe some sort of textured rubber I'm guessing? I'm not usually a great fan of logo's on watch dials, and I don't have any great affinity with Aston Martin, but I can live with this one, I hope they have this in the TAG boutique on Oxford Street next weekend - I may be forced to purchase it there and then!

The other Aston Martin Special Edition is a Heuer 01 Carrera 45mm with a very unusual dial, which I can't quite make up my mind about to be honest. I think it's a little disappointing that they've bottled it and gone for red highlights when the lime/yellow could have looked so much more interesting. There is, after all, no shortage of black and red Heuer 01s already... but maybe they thought the yellow was a little too... how shall I put it, garish for the average Carrera buyer? 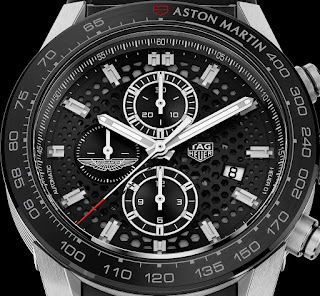 The case is a little unusual, being machined to appear almost as if 'sandwich' in construction. I must admit on this element I'm not really sold, I much prefer the coated black case on my own original Heuer 01 skeleton. 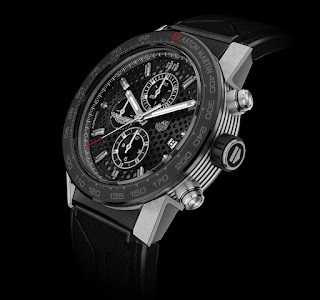 But still, if that Formula 1 looks as good in real life as it does in these publicity shots, then I think they've knocked it right out of the park. No sign of these on the TAG Heuer website as yet, so no prices... but I assume the Formula 1 should be around the same price as the base F1s (as the Red Bull was), although I notice the hands on it are black gold so maybe it could be slightly more? The Carrera will presumably be around the £4300-£4500 mark in line with models like the Drive Timer.

Read more about these two watches on Calibre 11