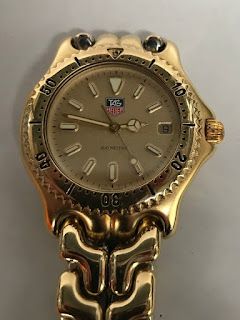 I was browsing eBay the other day and I came across this S94.406C which looks to be in fantastic condition for it's age, and I even went so far as to enquire about the size of the bracelet. No joke I was seriously considering putting in a bid! 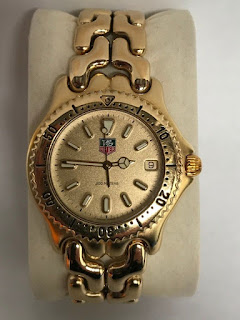 Now don't get in a pickle, I didn't win it, I never even put a bid in, although if I'd realised that it wasn't going to go up any more I might have been tempted. Why? Because I've always wanted an S/EL (though I don't particularly want a Link oddly) and ideally I'd like one that's as big as possible, because nearly every time I find one I like for sale they are some ridiculous 34mm nonsense.

Actually, the size isn't my only concern, I'm also bothered about the clasp attacking my wrist like so many other watches... and since the bracelet is kinda the whole point, switching to a pin buckle strap isn't an option. So, sooner or later I'm going to have to buy from Watchfinder or somewhere I can return if I don't like it. 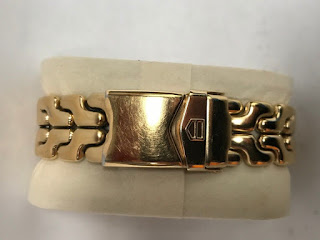 Now I'm not going to try and convince anyone that this is a good watch, it's clearly an abomination against mankind, but in a warped, perverse way, I like it. It's so outrageously obnoxious in it's goldness, that it crosses the line of bad taste and keeps going right back to the point where it reaches critical mass and becomes 'so bad it's good'!

But when I was looking at this watch is it was going for £340, with five or six hours to go, and I thought that's going to end up in the £500 range and as much as I twistedly like it, that's too much. Also, as it happens the end time of the auction was difficult for me as I was stuck in my car negotiating snow drifts for two and half hours, so by the time I got home and thought to look the auction was well over.

Well, not one further bid was made and so someone got this watch (to fit a 7.5" wrist) for £340, which seems like a bargain really. I mean, it's not everyone's cup of tea sure, but it's 42mm including the crown and damn, the more I think about this the more gutted I am.

Sure this isn't one of TAG's best watches, but the S/EL was a huge part of TAG's history... lest we forget, a certain Ayrton Senna wore an S/EL (albeit on a leather strap), and this, gold plated version, exemplifies the glorious, over the top consumerism of the 1980s like no other piece. 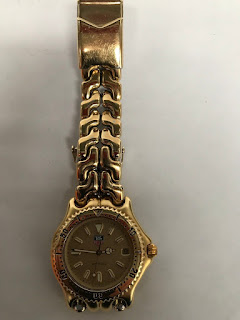 I know most of my readers are probably reading this and positively recoiling in absolute horror, but it ticks so many boxes. I don't have an S/EL, I don't have any type of gold watch, I have very few bracelet watches, and it's the larger size... okay I've run out of boxes, and maybe if I'd actually bought it the clasp might have caused instant frustration, and yeah, maybe once the novelty had worn off I might have thought - what the hell was I thinking, but still, there's something about this one that speaks to me.

Email ThisBlogThis!Share to TwitterShare to FacebookShare to Pinterest
Labels: #S94.406C, S/EL, Spotlight On