FEATURE: A Trip to the TAG Heuer Boutique in Meadowhall 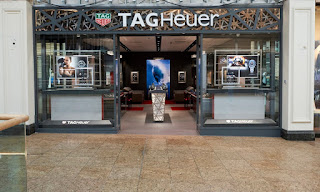 A couple of weeks ago I happened to be passing Meadowhall and stopped in and to my surprise found a newly opened TAG Heuer boutique, this was before they'd even posted it on their Facebook, but unfortunately I was in a rush and couldn't spend much time there.

Last weekend I attended the Infest Festival in Bradford and stayed over in the Premier Inn opposite Meadowhall, so I was there bright and early on Saturday morning, desperately hoping that by some miracle they might have the WAY208C Aquaracer that I've been trying to track down.

Well, a quick scout around the perimeter told me that particular hope was in vain, so I fell back on other possibilities and tried on a few watches instead. The first watch I tried on was the new khaki Aquaracer which was released alongside the 'snow' camouflage version that I tried on in Steffans recently. 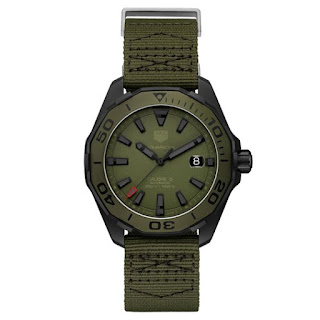 It was interesting to try this one on and to see the difference between this and the very similar camo version. I still think the strap is garbage, but it's less offensive on the eyes than the blue/white version. I can't understand why the silver retainers are so big, they just seem unnecessarily clunky and the watch is quite difficult to put on and get tight enough to feel comfortable somehow.

I mean obviously if I was going to buy this then I would change the strap, but the dial is odd. It's quite hard to see the logo and text on the dial from most angles, I suppose this is also supposed to be a 'camo' model and in that respect it works a lot better than the 'snow-camo' version, but I would pick that one every time. Yes the blue/white one is not to everyone's taste but in comparison this is quite dull, I guess it depends if you are into the military aesthetic? 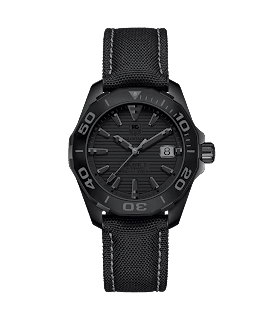 The next watch I tried on was the Aquaracer Phantom three hander, which I've tried before. Considering this is a limited edition of 2,500 it's quite surprising that these are still knocking about, they obviously haven't exactly flown off the shelves. I still quite like it and if I could purchase the black nylon strap from this watch and stick it on the blue/white camo one or the WAY208C that would be an acceptable compromise, but I think I've got over my initial attraction to this one.

I tried on a couple of Carreras, but nothing that I haven't seen a million times before. I still quite like the Carreras with the mirrored 'minute' numerals, but for the price (£4000) I think I would much rather go for the Red Bull Heuer 01 on the blue leather strap. 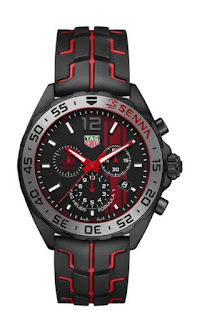 I was interested to try the new Formula One Senna chrono, if only because I wanted to get another look at the strap. I didn't really comment much on the strap when I posted about the Man Utd F1, and I have to say I rather liked it. The raised centre section doesn't seem as weird as it does in the pictures and the strap is quite comfortable. TAG have incorporated a feature into the strap which holds one of the strap retainers in place which is a fantastic idea. It does make it a bit harder to get the tail of the strap under as it's quite close the buckle, but once there it's very secure and if you are like me and the retainers moving drives you nuts then this is a boon!

The watch itself is okay, the aluminium bezel looks good but you just know it's going to get scratched. The red stripe on the dial is very muted as well and again those plastic looking bright red hands make this look cheap I'm afraid. It's a pity because simple silver hands would lift this watch, the case looks great, the contrast with the bezel is nice and the strap is excellent... but overall it doesn't really wow me. 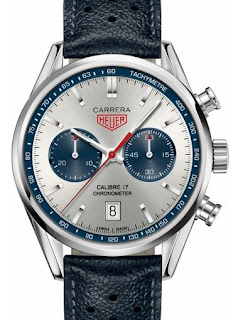 The last watch I tried on (at the salesman's suggestion) was the CV5111 Heuer Carrera, which at 39mm is a tad on the small side for my 7" wrist. It is a very nice looking piece, but the retro look really isn't me at all and again for nigh on £4000 I would be looking at another Heuer 01 rather than this. But it was still nice to have a look and a try on.

On the face of it there was a fair collection of watches in there, but when you consider that TAG's website offers over 200 Carreras you realise it's actually quite a limited selection on display. Apparently business has been good and the Goldsmiths next door has dumped TAG in favour of Longines, also while I was waiting outside for my wife I noticed a couple of young girls walk by (about 20 I guess) one of which pointed to the shop and said 'Look a TAG shop!', so TAG's marketing efforts are obviously paying off.
Posted by Robert Carrier at 12:10