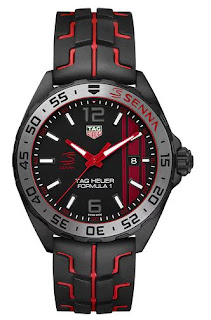 As you may have gleaned from my comments about the new Calibre 6 small seconds models, I'm really not a fan of the current 'shiny' steel cased models, however, coat the case in black PVD (or whatever it is they're using this week) and they look so much better. Indeed, if I had any love for Manchester Utd I might possibly have been tempted to purchase their F1 model, and if my Dad was still alive and I had a lot of disposable income I would have loved to have bought one for him, but alas, sadly not (on both counts)...

And so we come to these new Senna Formula One's... which utilise the same FT8027 straps as the Manchester Utd watch, which makes sense because of Senna's connection to the Link bracelet (which these rubber straps are designed to mimic). I'm still not sure what I think of these, they do look kind of cool in that brash way that is okay for a quartz Formula One, but I'm still not sure about that raised centre section.

I have to say, though I haven't yet seen one in the flesh, in these pictures these look even better than the Man Utd watch. Having looked at that watch again in a shop window earlier today, it is quite a dark watch and the silver bezel on these gives it a bit more pop, especially with the red 'Senna' logo and black tachymetre markings. 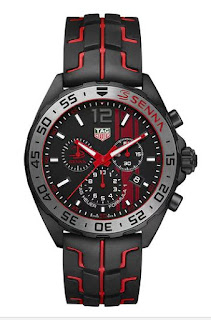 To be honest, I'm usually one for chronograph watches, but on this occasion I'm rather more drawn to the three hand version. I do like the chrono and when I get to see them I might change my mind, but from these pictures I think the chrono looks a little too busy with the three subdials and the stripes and the date and the logo. There just doesn't seem to be any room to breathe on that dial whereas the three hand version looks a lot more easy on the eye.

I'm a bit confused about that as there are plenty of other similar designs which don't give quite the same claustrophobic feeling, the Red Bull F1 for example never struck me as being too busy. Maybe it's something to do with the black on black aesthetic?

I must say I am rather tempted to hang fire on purchasing the WAY208C Aquaracer until I've had a chance to see one of these because while I'm not a massive Senna fan, perhaps a black and red quartz model with an unusual rubber strap is just the sort of thing my collection is crying out for?