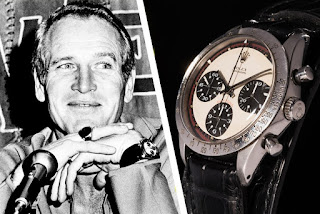 As I'm sure most of you are aware, Paul Newman's 'Paul Newman' Rolex Daytona recently sold at auction for a frankly astonishing $17.8M. By comparison, Steve McQueen's Heuer Monaco (used during the filming of the film 'Le Mans') sold a while back for a much more reasonable $800,000, albeit there was a major difference. In Newman's case it was 'his' watch, personalised with an engraving on the back by his wife who gave the watch to him as a gift. By contrast the Monaco was supposedly one of three watches used during the filming, although quite what's happened to the other two I don't know.

The previous record was held by the Patek Philippe 1518 (which sold for $11.1M in 2016) which was a stainless steel version and one of only four in that material ever made, and before that came the 5016A blue enamel dial grand complication made for the Only Watch charity auction in 2015.

It's hard to say quite why the Paul Newman sold for such an incredible sum, in the case of the two Pateks there are literally only 4 and 1 in existence, so it's a case of genuine rarity, but as I understand it there are something in the order of 2000 made with what is known as the 'Paul Newman' dial.

I have not been able to verify this number, but I'm sure I heard it somewhere... but in any case, the rarity is nowhere near the league of the Patek watches (and lets not even get into horological value), so why is this watch worth so much money? Sure this watch was expected to fetch some big money, but nobody expected it to open with a bid of $10M, indeed it's estimate was a mere $1M!

To be honest I can't help but think that this is a watch that is heading for a fall. It might take a while, but since there's nothing 'special' about this watch per se, it's 'value' comes from the fact that it was owned by Paul Newman and that the dial configuration has become known as 'the Paul Newman'. Is that really enough to justify it becoming the most expensive watch ever sold? 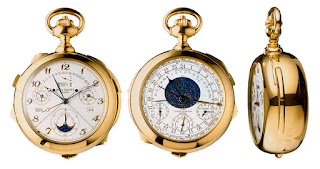 In 1999 the Patek Philippe Supercomplication was sold for $11M, and then again in 2014 for $23M. However, this was a pocket watch, not only that but at the time it was the most complicated watch in the world. It was recently offered again and failed to sell, partly because the title of most complicated watch has now been taken by the Vacheron Constantin 57260.

Personally I feel that these watches have more inherent 'value'. But the problem is that once the watch is no longer the most complicated watch in the world then the value falls. When it comes to values, you either need something 'unique' or you need something to be 'the first', someone else can always make something 'more' but they can't take away being 'first', but is simply being 'Paul Newman's' Paul Newman really enough to sustain the value long term?

I guess that will very much depend on the lasting fame of Paul Newman himself. To me, here in the UK, that doesn't seem a particularly good bet, but I think he was perhaps more famous in the USA?

Then, there's the popularity of the Rolex Daytona itself, is that going to last indefinitely? It wasn't that long ago you could buy them for reasonable prices, it's only recently that they've gone through the roof. Is that going to change?

If you're buying a rare Patek Philippe, it's not something that's driven by a surge in desirability in the wider market place, you're buying a special and rare watch and that's never going to change. I can't help but think that this is something of a 'pop-culture' aberration that in time may be seen as something of an expensive blip in the market, and potentially one that costs someone a lot of money in the long run... 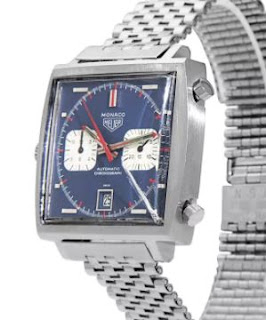 Since this is a TAG Heuer blog, I couldn't end without pointing out that Watchfnder are currently selling a 'Steve McQueen Monaco' made in 1969 with the box but no papers for £14,200. Which seems a lot, but also a lot more reasonable!
Posted by Robert Carrier at 12:24