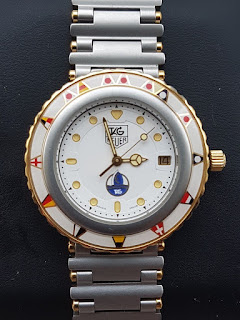 Browsing eBay yesterday I came across this little nugget, and I have to say, those unfamiliar with TAG Heuer's of the past might well take one look at this, point, laugh and declare it fake as fake can be. But, while the logo on the bottom part of the dial does raise a question mark, the watch as a whole is perfectly plausible. 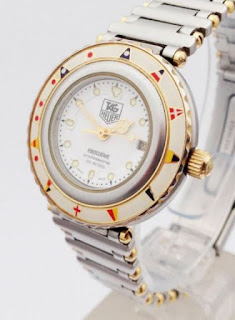 As you can see on this picture the standard version of this watch featured the model name 'Executive' across the lower part of the dial along with two more lines of text, whereas the model I found on eBay has that pesky logo. But this is not at all unusual for TAG after all, a company who loves making limited runs with all manner of badges and logos on the dial.

As with most models in the 80s, TAG made this model in three sizes, 36mm, 34mm and 30mm - commonly referred to as 'Mens', 'Midsize/Unisex' and 'Womens'. The model pictured above is actually the 30mm version, which rather surprisingly has a 19mm wide bracelet. 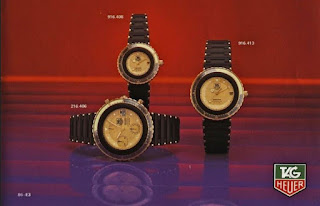 The 'Executive' range isn't one that's exactly fondly remembered, it's no Monaco or Carrera and I can't imagine anything would entice Mr Biver to put it back into production as it's very much a watch that's 'of it's time'. This watch was made in 1986, at a time when most of the TAG range was made up of re-branded Heuers (the 'Formula One' series being a notable exception, and despite looking larger it measures a fairly small 36mm across the face (38mm inc crown). 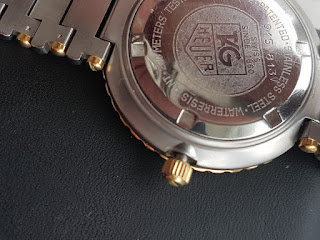 As you would expect from such an elegant design, the watch seems quite thin and features a quartz movement but befitting it's 'Regatta' style it's water resistant to 200m, so quite safe to take on the yacht!

I'm sure a lot of people don't, but I kind of like a lot these old TAG designs and if I had unlimited funds I would buy this just to have it. I dare say it would never trouble my wrist, but it would look lovely in a display cabinet. It's not even as if this was a 'lot' of money, it seems to have disappeared now but I'm sure it was on there for £300-400. But for £400 I could get quite a lot of half decent watches that I would wear, or half way to something properly worth while. Ah well, maybe when I win the lottery I'll collect one of everything...

More pics and info available in this advert here
https://www.instantluxe.co.uk/watches/wrist-watch/tag-heuer/silver-gold-plated-unisex-executive-A89093