FEATURE: Sniffing Out TAG's on Ebay

As before, I have no connection or interest in these sales, nor can I vouch for their authenticity, I'm just pointing out a few interesting things I've picked up on... 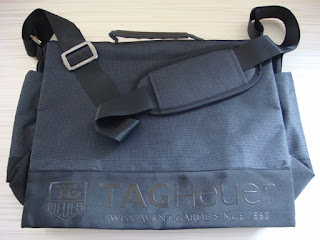 I posted some picks of this the other day, however, the listing seems to have disappeared. I assume it was sold as it was actually quite reasonable compared to some TAG bags on Ebay. 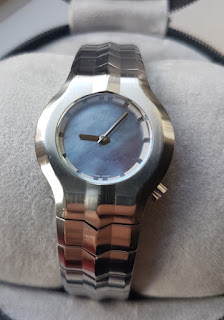 I'm sure this will go up, but at the moment the bidding stands at just £49.99 for this 2002 Alter Ego with a blue mother of pearl face. Seems to be in very good condition and with it's full compliment of bracelet links, I'd buy this myself if I thought I could get away with it. Sadly at 26mm it would look ridiculous, and as yet the wife remains unconvinced. Expect this one to go to the mid-hundreds, if not then it looks a bargain with full box and papers. 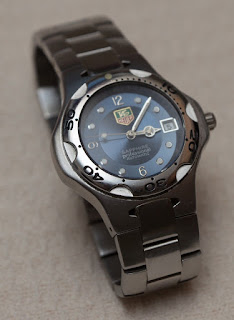 Standing out for all the wrong reasons, this fake Kirium has a ludicrously oversized logo and although on first glance the bracelet seems credible, closer inspection reveals very poor fit and gaps. It could be that the bracelet has had a hard life, but I suspect it's more likely just a crappy fake. Also, why does it say 'Sapphire' on the dial? Somebody has bid over £100 for this garbage, why would you do that when you could get an F1 Kirium for less than £400? Needless to say I have reported to Ebay, but we'll see if it gets taken down or not...

UPDATE: Ebay didn't do anything and this sold to some poor schmuck for £215. 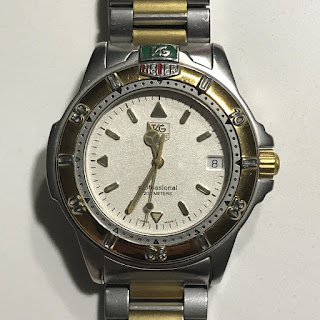 A bit of a risky one here, this watch has supposedly been in storage for ten years and is offered 'in need of a new battery'... which is all well and good, but a) who knows if it actually works, and b) who knows if the battery has leaked and destroyed the movement? Bidding stands at £150, and I wouldn't fancy going much higher than that to be honest... 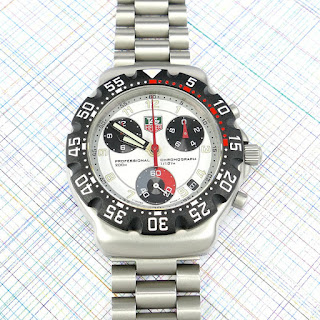 You won't get any bargains from 'watchlinks' but this seller does seem to offer some excellent pieces and this gorgeous Formula One Chronograph from the early 2000s is no exception. The asking price is £799, which is the high end of acceptable, but the watch looks fantastic and has probably been polished to some extent, and has definitely had a new bezel. I must admit I'm sorely tempted myself! 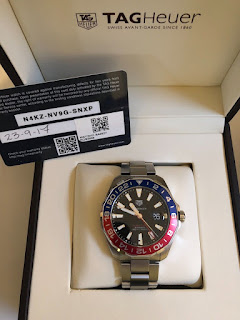 Rather surprised to see this here, not even two months old and it's already up for grabs. With 5 days left bidding stands at just under £1000, and with grey market prices for new at £1700 I'd be reluctant to go higher than £1500, but assuming the paperwork is all in order it's still likely a substantial saving over RRP. 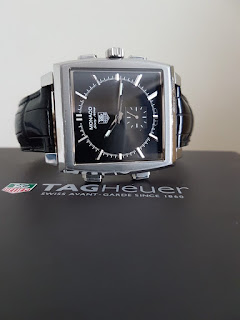 Oh now this is more like it! With 5 days to go bidding currently stands at £880 for this piece of TAG Heuer history, I wonder how much higher it will go? I do like the idea of this and it kind of appeals to me in the same way that the Monaco 24 does, it's a Monaco, but it's something more...

The Monaco Sixty Nine is one of those watches that tends to fade from memory and it's only when one turns up that you think to appreciate it all over again. This watch features a revolving case with the classic Monaco dial on one side and (effectively) a Microtimer digital on the back. The case is very thick though, so it's definitely not going to be for everyone, but like I said yesterday about the 'Executive' model, if money was no object I would definitely have one in my cabinet.

Apparently though, the rubber protection plates fixed to the back case leave marks on the glass, so I was told by a man in Goldsmiths earlier this year... 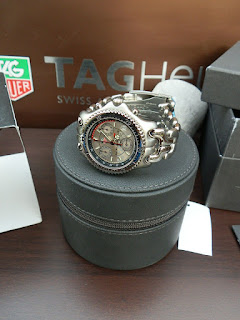 It does seem a little fishy just how often 'New' pieces of the West McLaren Mercedes S/ELs appear on Ebay, but 'premier_brands_boutique' appear to have solid feedback and claim to have sourced this directly from TAG themselves. Quite why TAG would have NOS pieces of a nineteen year old watch knocking about is anybody's guess, but still...

There's no denying the watch looks pretty special and comes complete with all it's various bits and bobs, and perhaps tellingly the packaging looks correct for the period, so that's a good sign. This currently stands at £580 with just under six days to go, I'm sure it will go will over the £1000 mark and possibly a fair bit higher. 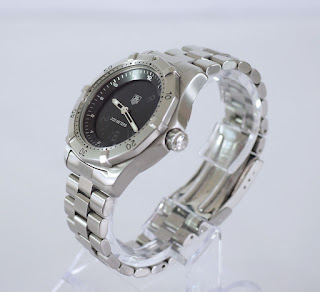 I can't tell you how tempting this is, at just £495 and in superb condition it's all I can do to keep myself from buying this... I mean look at it, isn't it beautiful? It is a tiny, weeny bit on the small side though at just 38.5mm, but that's probably something I could live with, but only because it's stunning!

But, being sensible about it, it is a bit too much like my F1 Kirium perhaps, and it's yet another black faced watch. What a watch though, this one really does make me want to throw caution to the wind... 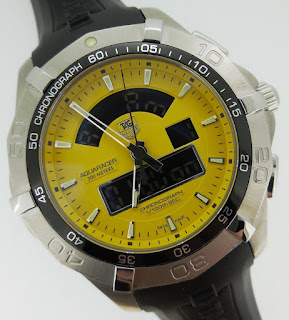 Ever since I missed out (well, passed over more like...) the yellow dial Calibre S Aquaracer earlier in the year, I've kind of hoped one might turn up again, and in the meantime this little beauty has also come to my attention. Sadly this one lives in the USA and as such would be liable to import duties (which I do not intend to get involved with!), which is a shame as it is on offer for just over £800.

These yellow dial Aquaracers pop up now and again, but they seem to fall into two categories, the nice ones that are a tad overpriced, or ones which have been worn every day and are covered in bumps and bruises. I think I'll keep my money and hope that Bicester Village can furnish me with one sooner or later...