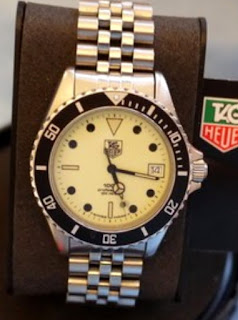 Looking through the old TAG Heuer catalogues, it's amazing how many different models there were available in the early days of the brand. Some of them have aged better than others, although some of the gaudiest models have a certain perverse appeal.

The 980.113N is more of a classic piece, with it's 'Submariner' style and very cool fully-lumed dial, this is an old TAG (well Heuer really) that I would be happy to wear. At least I would if it was a bit bigger. 37mm is a tad too small for my 7" wrist, There is a larger version called the 980.032 but as you can see from the picture below, it's not simpler a larger version of the same watch, the case is bigger and changes the style of the watch as it protrudes out further than the bezel. 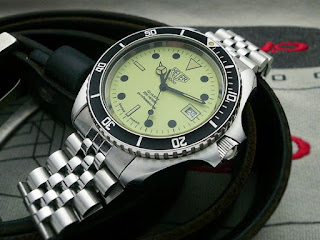 I don't find the 980.032 as appealing really, the changes to the case take it away slightly from the 'Submariner' look, which is a shame. Also a shame is that there is a black version called the 980.031 which is very cool (I believe this is the watch worn by Timothy Dalton in the James Bond film 'The Living Daylights'), but again I suspect this is also 37mm in diameter. 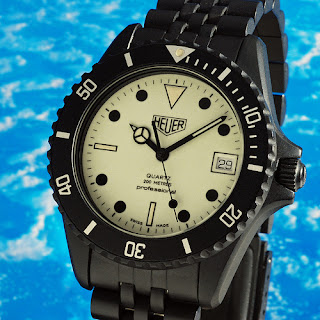 What a pity, because that is a great looking watch, and I love the black bracelet as well. I wonder how well the black coating has stood up to nigh on thirty years of wear though, and if there was a mint condition piece I bet it would cost a pretty penny! 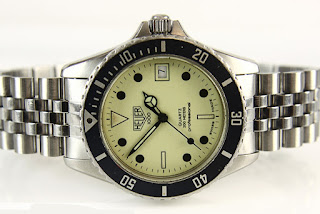 As you can see from the pictures above a lot of these watches can be found with either Heuer or TAG Heuer logos since these watches came from the very early days of the TAG Heuer brand, it's quite interesting looking through the old catalogues and you can find scans of them on Calibre11. Not all the watches are as nice as these though, there's some genuinely horrific pieces like the 'Tri-Star' range and an awful lot of black and gold bracelets, and even a combination of the two which will probably hurt your eyes... but even then, you might still kinda like it, in a twisted kind of way. 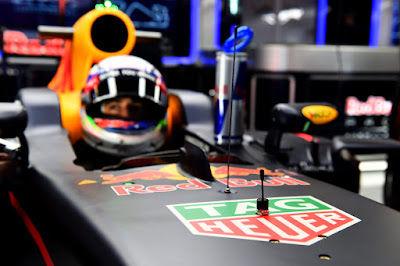