FEATURE: Another Trip to London in Search of Watches! 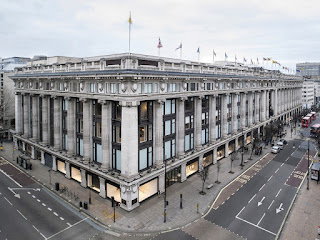 My first stop on the watch tour today in London was at Selfridges 'Wonder Room', lot's of desirable stuff in here... including an Audemars Piguet Ceramic Concept watch (about £190,000 I think), plus some nice Roger Dubuis tourbillons, lots of Hublots, Corums (not so sure about these), and of course TAG Heuers.

I was pretty surprised by some things I saw in there to be honest, including a diamond bezel Connected of all things, and the camouflage Aquaracer, which I am kind of intrigued by and decided to try on. 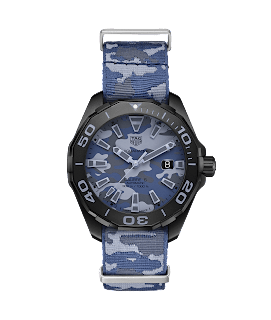 This was my first chance to try on the new camouflage Aquaracer 300M and I must say it does have a certain something about it. Albeit, the strap is horrible. I get the idea, tying into the dial pattern, but it really doesn't look that good and the strap (despite the thin material) seems oddly bulky with the awful chrome strap retainers sticking out all over the place.

One good thing about the dial design is that the cyclops seems less noticeable on this watch than most others, in fact I like the dial design quite a lot and I think this would look great with a plain black rubber strap (as would most Aquaracers, obviously). I like the finishing on the case too, very smart indeed. But one thing that was a little disappointing perhaps was the 'brightness' of the dial, it seemed a bit muted, I was hoping it would be a bit more in your face if I'm honest, but then I guess it is supposed to be camouflage after all.

So leaving aside the issue of the cyclops... yet again I'm faced with the prospect of buying a watch and then having to fork out for a replacement strap. And this one isn't a cheap watch either, it's £2200 for a three hander with a Calibre 5 movement. And, crucially, one which I think will not hold it's value terribly well. I think this is one to stalk on the second hand market for sure, along with the 'sand' coloured 2016 Aquaracer perhaps. 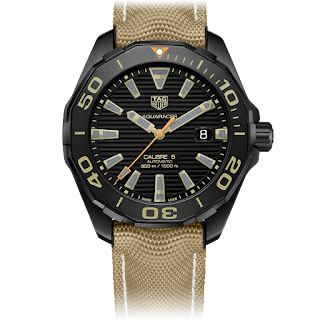 Speaking of other Aquaracers... over the road in Goldsmiths they had one of the three hand Aquaracer phantom limited editions on offer for about £1750. It doesn't appear on the Goldsmiths website so I'm assuming it's an offer unique to that particular store.

Back to Selfridges, and there were some interesting new TAG Heuers on display. This was my first chance to catch sight of the new Autavia, which actually looks better than the pictures, albeit not my taste. I really can't see what all the fuss is about with this watch, the size looks absolutely fine, it doesn't look overly big at all. With it's old school aesthetic, it really does stick out in the display actually and doesn't look like anything else on offer, so perhaps it's as well it has got the Heuer name on the dial! 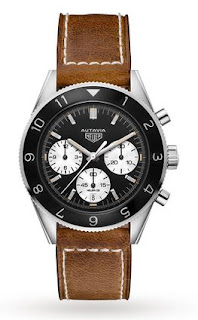 Also in the cabinet, were a pair of Carrera tourbillons, one of which had a diamond bezel. The standard version looks pretty cool and comes on a very nice leather on rubber strap (I presume) and costs a very reasonable £12,600 or thereabouts. Not sure on the price of the diamond bezel version, but it looked pretty ridiculous anyway to be honest, although not as completely silly as the Connected with the diamond bezel, I mean really!

After Selfridges I took a wander down Bond Street, where I came across a pretty incredible shop window containing a pretty wild selection of watches. I'm not sure what the place was called, but in the window they had Richard Milles, Hublots, Ressences, several Urwerk models (including a diamond encrusted ladies model), quite a few Greubel Forseys and a couple of different versions of the MB&F Horological Machine. Pretty exclusive stuff!

The highlight of Bond Street for me though was Charbonel et Walker, if you haven't had a Milk Sea Salt Billionaires Shortbread Truffle then your life is incomplete (although be warned, the price tag is as high end as the location suggests - cheaper in John Lewis actually £12.50 for a box of 8). 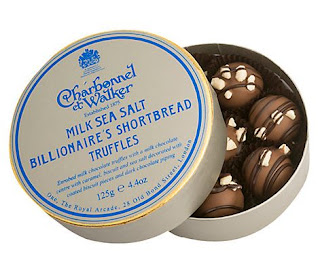 But leaving that aside, the watch highlight of Bond Street for me was the Breitling boutique, and more specifically trying on the new black dial Avenger Hurricane 45mm, easily my favourite Breitling ever. 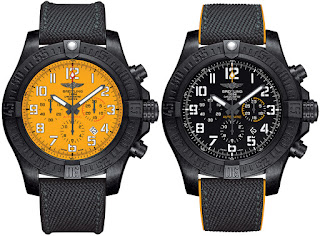 When the original Avenger Hurricane came out it was 50mm and featured a 24hr dial. I think a lot of people looked at it and thought 'I'd prefer a 12hr dial, but the 24hr dial is a novelty so I can live with that... what I can't live with is the size', and so, inevitably one might suggest, Breitling have seen sense and released the watch in a smaller 45mm size with a 12hr dial in a choice of yellow or black faces.

When you see the 45mm and the 50mm together in the case it is hilarious how different 5mm can look, it's like night and day. In all honesty I can't help but think those 50mm versions are going to be sitting there for a long time, because very few people are going to choose the bigger version now that there's a sensible size option on offer. For me the black dial is the definite winner here, I like yellow touches on a dial and a yellow dial can work on a 'cheaper' watch, but for me, looking at these two the black dial definitely gives the impression of being more expensive. And this is an expensive watch, there are strap options which drops the price about £100 (basic strap without the yellow rubber back) but both these watches are basically £7,000.

The strap is very cool, the only bad thing is that you have to cut it to fit, but it does have a slider system in the clasp to allow quite a good bit of movement, more than sufficient to cope with all but the most exuberant of weight gains (in which case you might want to think about the 50mm). As with most Breitlings there's an engraved solid caseback, but it does contain the new in-house Breitling 01 movement.

The Avenger Hurricane certainly didn't disappoint on the wrist, it's made of something called Breitlight, which even the staff in the shop couldn't completely explain, but it's a lightweight compound of some sort. I was a little worried it would be too light and feel plasticy, but it doesn't at all. It's not unduly light, it feels like a smaller steel watch would I thought, and also (perhaps crucially) it doesn't wear like a 45mm either.

My TAG Heuer Carrera Heuer 01 is 45mm and that's a big watch on the wrist, my limit really, so I was a bit dubious about the Avenger and suspected that even in a 45mm version it would look and feel too big. Sadly, not at all. In fact to me it felt more like a 44mm, which means instead of being able to dismiss it out of hand I now have to live with the fact that I really want one, which is a bit annoying as I don't have £7,000 lying around.

Well as I've always said, there's always a 'BUT' with a Breitling, usually it's the dial, or the case, or the silly wonky strap links... but in this case the only 'BUT' is the price, so... the question is can I live with an Aquaracer with a cyclops, or not? 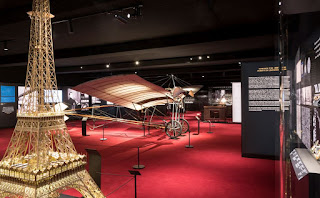 After lunch I headed over to the Design Museum to see 'Cartier in Motion' which is not only a bloody good exhibition, but it's FREE as well. The exhibition is about Cartier's interaction with people like Alberto Santos-Dumont and Gustave Eiffel, and features a considerable quantity of Cartier watches and clocks. If you are in the Kensington area before the end of July I thoroughly recommend a visit.
Posted by Robert Carrier at 09:35