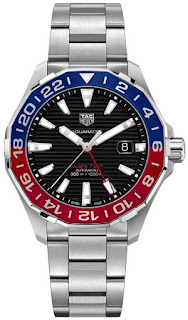 Unfortunately I wasn't able to try these on as I was in a hurry, but I did get a good look at the two of them through the window and thought I would share my first impressions with you. Firstly the new Aquaracer GMT Calibre 6 and secondly the new Formula One Calibre 6.

It never fails to surprise me how big the Aquaracer's look in the window. I really don't know why that is, but I imagine it must put off a lot of potential customers from trying them on. I don't understand how it is that they look so big, because at 43mm they are a couple of mm smaller than my Carrera Heuer 01.

Anyway, having recently tried on an Aquaracer I have a good idea of how these feel and look on the wrist, the real point of interest here is the bezel isn't it? I must admit I'm in two minds about it, as I have always been with the Pepsi Rolex GMT, I kind of like it because it's colourful, but at the same time I can't quite reconcile this much colour with a luxury watch somehow...

The bezel itself looks good, although I know a lot of people are majorly unhappy that it's an aluminium insert and not ceramic. I can totally understand that, because I would imagine this is more a watch you would wear everyday and you really are going to live in fear of scratches (unless you are one of those overly well-adjusted freaks who don't care about things like that). It is a shame it isn't ceramic, but I'm sure TAG would say that it would be too expensive, and let's not forget, Rolex only just worked out how to make the Pepsi ceramic (I can't remember which it was, but they struggled with getting the red or the blue right) and so who's to say TAG Heuer even has the capability to make this in ceramic?

The price in the window was £2350, which I assume is full list price... I would check but I can't seem to find it on Ernest Jones, Goldsmiths or TAGs own (terrible) website. So I'll have to assume that's what it is!

I must say the thing that struck me about the bezel was that it didn't look quite as 'rich' as I expected*. Not that it looks pre-faded or anything, it just doesn't look quite as in your face as I thought it might. This is probably a good thing, I guess too bright could have made it look 'cheap' and nasty and besides, some people actually find faded out bezels desirable (which personally I don't understand, but there you are). 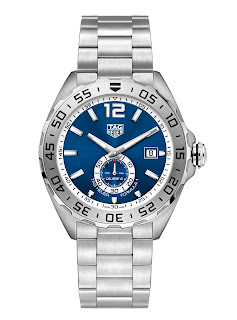 The second piece I caught sight of was this blue dial Calibre 6 small seconds Formula One which retails for £1300 I believe, which is pretty affordable for an automatic watch. I've never been much of a fan of small seconds dials, I kinda think the second hand should be where the second hand should be unless it's a chronograph, but if you like it then this is a fair option I guess.

The blue is quite nice, dark enough to look classy, without being too dark - it's still clearly a blue dial (this watch is also available in white or black). I like the large '12' and the dial overall although I find the white subdial ring a bit too chunky. Actually my only real negative with this watch, and automatic F1's in general is the case design and more to the point that horrible shiny crown.

This case in black looks so much better, but in steel it looks a bit cheap to me. Obviously as I didn't try it on I don't know what the bracelet/clasp is like, but I'm betting it's one of those cheap looking things that's been on every auto F1 I've tried on in the last couple of years. Actually I'm slightly surprised they haven't made this available on a NATO or some other alternative strap since that would presumably bring the price down even more.

Like the Aquaracer, this one is 43mm too, so slightly smaller than my own CAU2012 Formula One. I think if it was down to me I would spend the extra £1000 and get the Aquaracer, I think it will probably hold it's value better and it gets you some of that Rolex Pepsi kudos at a much more affordable price.

*Having looked at this again, it looks plenty rich enough actually!