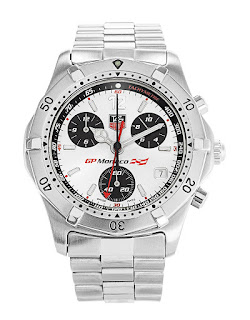 A couple of days ago I decided to do some window shopping. The TAG warchest currently stands at just over £900, so not enough for anything new or significantly extravagant, but enough to snag a pre-owned gem or possibly a TAG outlet special (the yellow Aquaracer Calibre S I was looking at a while back was about £949 at Bicester Village for example).

Well to be honest I didn't get any further than looking at the Watchfinder website, partly because my laptop seems to have developed a distinct disliking for eBay (taking forever to load pages and pictures) and partly because the first few pages threw up some interesting pieces, which I thought I would share here.

First off was the CK1116-0 you see above. This was for sale for £675 and was very tempting indeed. Condition looks great, albeit I'm always wary of older bracelets because the two old style ones I've bought previously have proved very uncomfortable. However, this one looks like it has a slightly newer clasp, more like the one on my wife's Aquaracer (which she says is super comfortable), so that assuaged my fears slightly.

Actually I have posted about this watch before (HERE) where I talked about the set of five 'Grand Prix' location watches (Hockenheim, Silverstone, Monaco, USA and Monza) that were available singly or in a set (limited overall to 800 pieces), as far as I remember this is the first time I've come across one for sale. Of course I have no way of knowing how long the watch was on the site before I saw it, but I perhaps should have known that it wouldn't hang around for long, and of course within 36 hours of me seeing it it had sold.

Well, I can't say I'm surprised really, and I'm kind of kicking myself a little bit because not only was this watch in great condition, but at 42mm it was also an ideal size for my wrist (unlike so many of the older TAGs which are just too small for me). Maybe if I'd bought from Watchfinder before I would have been a little less hesitant, so while I was faffing about checking out the terms and conditions someone else was snagging themselves a bit of a bargain.

On the other hand... nice as it is, this is still a sixteen year old quartz watch, and for another say £500, a whole world of opportunities opens up, so I can't be too upset about it. But somewhere out there, I'm sure someone is opening the box and reaping the rewards of my hesitancy! Ah well...

The CK1116-0 was the only watch I seriously considered purchasing, but that's not to say my search didn't throw up a few other interesting nuggets. How about a choice of not one but two 6000 Series Mika Hakkinen watches! 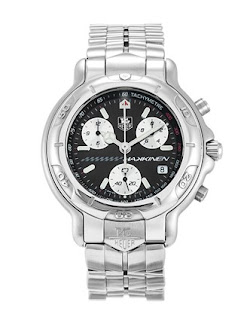 Limited to 2000 pieces, both were offered at £850, again this piece is an 18 year old quartz piece and for me I cannot really fathom how it can be worth more than an F1 Kirium, but market forces I suppose. Perhaps the limited edition is worth significantly more than the normal 6000, I didn't notice any non Mika versions to make a comparison. The 6000 series, while not unattractive, does look a little dated now and I'm still not quite sure if I like that logo stamped into the case where the bracelet joins the main body of the watch. It looks almost like it's trying a little too hard to look 'expensive' if you know what I mean. But then I've never seen one in the metal, and I was quite surprised when I saw a 4000 series that it looked better than I thought it might.

Fortunately for me, any decisions that needed to be made evaporated when I noticed the 37mm case size, which is way too small for me, and so I moved on... 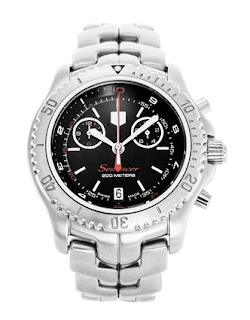 Admittedly, the rest of the watches featured in this post exceed the £1000 mark (some more than others) but this 'Searacer' caught my eye, and that's quite unusual for me because I don't usually go for the Link range much at all. This one looks like it's got a 1/10 of a second chronograph and again is obviously quartz, albeit slightly younger at a sprightly 14 years old.

Sized at a very wearable 40mm, £1,150 seems a relatively fair price and... I've just noticed the chapter ring, I wonder how that works - obviously a ten minute countdown timer (Searacer = Regatta watch). Interesting... and possible useful for boiling eggs (for those of us without a yacht).

To me, this is definitely one of the smarter looking Links that I've seen, but there's something about them that rubs me up the wrong way and I can't quite put my finger on it. I don't know if it's the bezel, but somehow they look a bit - I was going to say cheap but that's not it, a bit insubstantial perhaps..  and to be honest if I was going to go for this I might spring a little more and go for this instead. 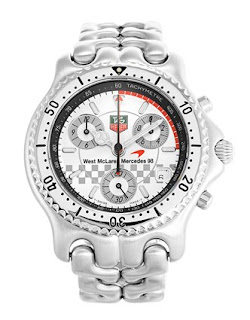 For another measly £100 you could instead secure this 42mm limited edition (4000 pcs) West McLaren Mercedes S/EL on a steel bracelet. Again I'm not sure if I've ever seen an S/EL face to face, and usually the ones I've seen on eBay tend to be in the smaller size ranges (34-36mm usually), so at 42mm this is a definite possibility. Not 100% sure about the dial, or the polished bezel, sometimes I look at it and think yes, and sometimes no... I'm also slightly concerned about the date, but I assume either it has a very long changeover period or it's something that was fixed after the photo was taken.

I'm definitely on the fence with this one. I think if I could see it and try it on I would probably go for it, but do I love it enough to go through the hassle of sending it back if I change my mind again - probably not, and let's not forget again that this is another quartz piece that is pushing twenty years old.

Last, but by no means least, I came across something a little more exotic and interesting... 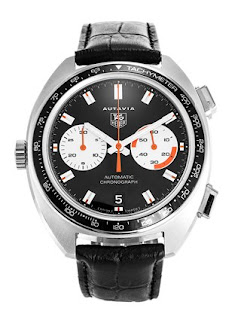 Obviously the Autavia is a hot ticket item right now with the new version just about hitting the stores and the original 'Heuer' versions going up in price faster than houses in London... but little mention is made of the 2006 re-issue. And perhaps it's not surprising... after all the re-issue wasn't a glorious success by any means and seemingly disappeared from the range within a year or two. Two obvious reasons spring to mind, firstly the case - which while it may be authentically 60s/70s looking is probably a bit marmite (in the same way that the Omega Speedmaster II is a bit marmite) and second, ridiculous as it is, is the simple fact that the dial features the 'TAG Heuer' rather than 'Heuer' logo.

But, if you can live with that then this automatic 40mm Autavia can be yours for £2215, which seems like a fair price really. In fact while I can't see this being an 'investment' as such, I can imagine that it will probably maintain it's value fairly decently what with so few having been sold and the cost of the original Heuer's becoming prohibitive.

So there you are, still slightly miffed about that lost 2000 series Monaco GP limited edition, but what can you do, some you win some you lose.

THIS POST WAS NOT SPONSORED BY WATCHFINDER, BUT IF THEY WANT TO SEND ME MONEY, WATCHES AND STUFF, THEN BY ALL MEANS GO AHEAD.