A couple of months ago I posted my 'Top 5 Monacos' to the blog, unfortunately... I made a mistake and omitted one of my favourites, so I thought the best thing to do would be to re-post the article, and make it my Top 6 Monacos' instead... 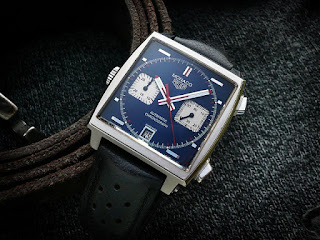 I feel like I'm in a slightly odd position when it comes to the Monaco, I mean, can you imagine someone writing a blog devoted to Omega who just wasn't that bothered about the Speedmaster? No, me neither, and yet... the truth is, while I kinda like the Monaco, it just doesn't excite me the way a watch that costs serious money needs to if it's going to win me over. I mean I'd like a Monaco in the collection, but I imagine it will be a long time before I have £3,000 in my pocket and nothing I'd rather spend it on.

My affection for the Monaco 24 range and in particular the CAL5113 is well documented on this blog, and for the purposes of this post I'm going to ignore these wonderful, futuristic and rather expensive models and instead focus on Monacos the purist might like, or at least tolerate... because you know what I'm like, there ain't gonna be no blue dial Calibre 11 in my list! 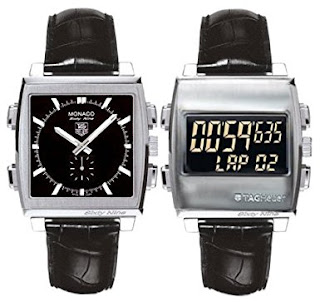 I'm also going to ignore the Haute Horlogerie pieces like the V4 and also the Bamford customised watches, this list will be Monacos we can all find on the pre-owned market if we look hard enough (and perhaps if we live in the right country), and finally, I'm also going to discount the Monaco Sixty Nine, because as much as I like that it exists, it's too thick and at the end of the day I've already got a Microtimer so I don't need another one strapped to the back of a Monaco! 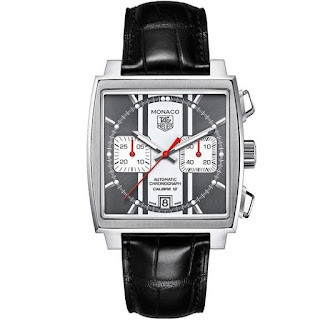 I only really came across this one the other day and it rather piqued my interest, echoing as it does the design of the blue/white Monaco 24 somewhat. I think the dial design works perfectly and I really like that it is symmetrical rather than offset like the classic 'Gulf' models. 39mm case size is perfect for me and it has the TAG Heuer logo rather than the Heuer, so I'm happy. I had to include this because it's just so unusual, made in a limited run of... I want to say of five hundred pieces, but I'm not 100% on that at the moment, 'Men's Club' is a Japanese magazine (I'm assuming 'lifestyle' rather than 'sexy ladies') and the watch was available through the Espace TAG Heuer boutique in Japan - I say was because I'm pretty sure it will be sold out by now. Being a Japan only release it was priced only in Yen (675,000) which equates to about £4,500. A fair price for a unique and very attractive alternative Monaco. 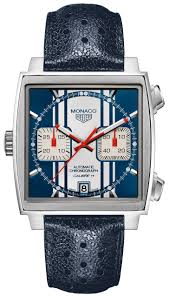 So, yes, it doesn't show a tremendous amount of imagination I know, but this one has almost everything (no TAG logo) I like about the grey boutique edition, but with an even  nicer colour scheme! RRP is apparently £5050, but I've managed to find one at a company called 'Regal Time' who have an unworn example with a full two year TAG Heuer warranty selling for £4330. Still too much to tempt me of course, but I can't deny this one's a beauty. 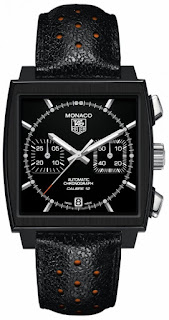 This is one I have actually tried on, must be a good couple of years ago at Bicester Village. Can't remember off the top of my head how much they were asking, let me go see if I noted it when I reviewed it... nope, but I think it was somewhere between £2500 and £3000. In my review I did say that the black case looks a bit odd on the wrist, but I still kinda like it, probably because the coating makes it look a bit more modern. This one has the ACM logo on the display caseback and an orange backing on the strap to match the tip of the second hand. Nice! 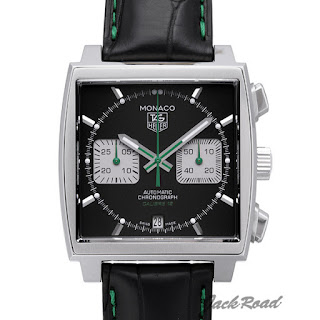 This is the one I missed out in my original post, and it only occurred to me when I started looking at the Grand Carrera Singapore GP Limited Edition. All the Singapore GP Limited Editions look great to me, you just can't really go wrong with a combination of black and green. Ideally I'd prefer it if the case was black, but on the other hand there's a nice contrast between the black dial and the silver case which gives it a classic air. No doubt this was produced in a small quantity - it doesn't seem to say on the watch itself, which is slightly odd - and so finding one is going to be tricky, but if you can find one, what a beauty! 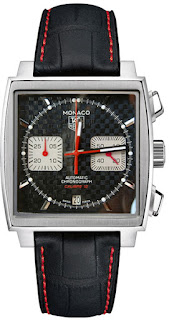 Another limited edition and another Monaco that I've actually had on my wrist, this one I tried on either last year or 2016 in the Royal Exchange branch of Watchfinder. As I recall, it was on offer for about £3600 and was in great condition (Blowers are selling one right now for £3750) save for one scratch on the case near the pushers for the chronograph. A lovely watch, but again, am I ever going to have that kind of money burning a hole in my pocket and nothing else higher up my list?


I think it's safe to say that I won't be adding a Monaco to my collection anytime soon (unless a ton of money falls into my lap of course) but I'd still like one, even if only to round out my collection, I mean imagine having a collection of ten Omegas and no Speedmaster, that would be kind of strange wouldn't it?
Posted by Robert Carrier at 13:29