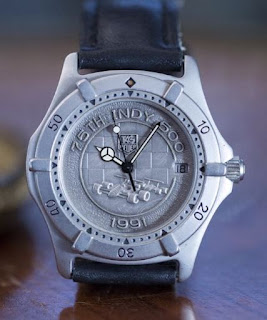 Recently Hodinkee posted a video interview they did with the famous racing driver Mario Andretti, Mario enjoyed a long and successful career including becoming the 1978 Formula 1 World Championship with the Lotus team, four Champ Car titles and one win at the Indy 500 (in 1969) and has gathered a fine collection of desirable watches throughout his career, seemingly without actually buying any of them.

TAG have produced many Indy 500 watches over the years, some of which are nicer than others, but this TAG Heuer 2000 Series made solely for the 33 drivers taking part in the 75th Indy 500 in 1991 is quite a special one as rather than simply sticking a badge on a regular model, they went the extra mile and produced a proper bespoke dial. True, it's not the most beautiful dial ever made, but at least they put some effort into it and as it was given to the drivers (who probably owned much more expensive watches anyway) it probably wasn't intended to be worn everyday (if at all). 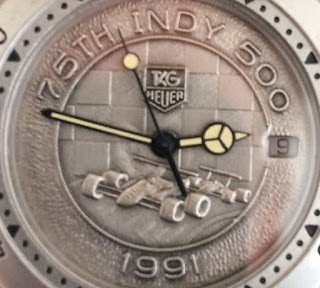 Because it was given only to the drivers who took part in the race, most of whom would probably keep the watch as a keepsake and for whom the watch probably didn't represent a significant value to sell, I can't find any record of any of them ever having been sold, never mind for sale currently. Indeed, there is such a lack of information on the internet about this watch that I can't even really say for sure that it's automatic or quartz, given the year it was made I would guess quartz, but there are automatic models in the 2000 series, so who knows? The only other information I found was a photo of Arie Luyendyck's watch from the same race.

I do like this watch, even though I concede it's not conventionally good looking. I just like the fact that TAG went to the trouble to make something completely unique (well, technically not unique, but you know what I mean) rather than just adding some text or a logo to a production dial. On the other hand, I can see that it works more as a 'corporate gift' than as a commercial proposition, but even so I'm happy it exists and that we can see it, even if we know almost nothing about it!
Posted by Robert Carrier at 18:00