ON THE WRIST: Aquaracer Quartz Chronograph 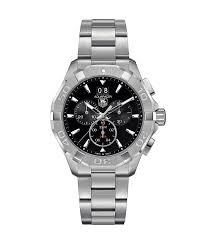 I tried this one on at the same time as the 'not-quite'sure-if-it's-a-white-dial-or-not' 40.5mm WAY111Y, and I have to say that while initially I was quite taken with the alarm version, once I put this next to it I was immediately drawn to this one. It's undeniably the case that we are all drawn to certain design cues that we know and love and so it's not hard to see how people can end up with a watch collection that has a distinct air of similarity about it. Of my nine piece collection, seven have a black dial (if we include the Microtimer) so when it comes to future additions I'm trying to broaden my scope a bit, but when you see a black dial watch that looks this nice it can make your resolve waver slightly.

I've been thinking that I would like a blue dial Aquaracer (probably quartz and on a bracelet) at some point. Something that's maybe a bit more blue than my 6000 Series, which is blue, but only in certain lights. So, while I've not been persuing this as such, that's where my head has been at recently... and yet, this watch has that certain 'wow' factor that comes from polished skeletonized hands on a black dial. Of course I already have almost exactly these kind of hands on my Chronotimer, but there's no denying they look very smart indeed. One word of caution though, as much as I love my Chronotimer, the hands aren't the most legible as often the polished surfaces reflect black and the hands all but disappear. You can see the same problem on some of the Carreras with polished Arabic hour markers, they look great, when you can actually see them, but sometimes they just seem to vanish into thin air. In fact, you can see exactly what I'm talking about in the picture below. 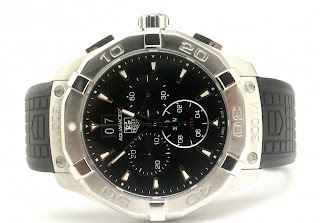 This watch is also available on a rubber strap, but for once I'm not convinced (I know....!). Granted I haven't actually seen it, but it doesn't look right somehow, this is actually quite a 'glam' watch and not 'tooly' enough to warrant the rubber, especially this kind of rubber strap that I'd rather expect to see on the more hardcore 500M divers like the one I reviewed the other day.

On the wrist it wears as you'd expect a 43mm to, if perhaps slightly smaller than my yellow dial Calibre S, which may be partly to do with the black dial. Next to the CAY111Y it didn't look massively bigger and unless you have really skinny wrists I don't see this being much of a problem for anybody, unless you just prefer a smaller watch of course. 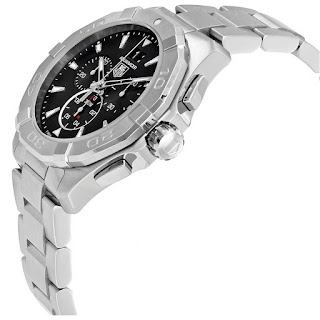 I don't have the exact thickness to hand (and TAG's website doesn't seem to supply it), but as you can see it's none too thick and will slide perfectly under a shirt cuff, and look perfectly at home with a suit. This is one of those watches that looks much better on the wrist than in the window and much, much better than it does in the catalogue. On paper it looks very average, but wrapped around my wrist I must admit I was rather taken with it... I still wouldn't put it on a rubber strap though, even a smarter one, it just seems a bit too dressy for that.

The bracelet is pretty standard Aquaracer fare, though I did notice the clasp has already picked up some scratches, but then this does seem to be a bit of a trend in Steffans unfortunately. I don't know whether it's down to the staff in the shop or just the punters in Northampton, but this shop does seem to have more than it's fair share of scruffy watches, which is a bit of a shame as the guys in there seem like good sorts.

The Chronograph is your standard quartz model with the 1/10th of a second reading at the 6 position, just as you've seen on other watches like the Formula 1 Red Bull and many, many others. The 1/10th of a second chrono does give you that fast moving subdial hand which does look pretty neat and will undoubtedly win you some 'cool' points with people who aren't entirely clued up on the watch game (not that you should be concerned with such nonsense of course). Price for this model is £1750, which is a jump over the Formula 1 models, but undeniably looks worth the extra cash, I've really gone off the Formula 1's of late, I'm not sure why, though it could be something to do with my CAU2012 and the slightly bitter taste it's left in my mouth.

Overall then, a very nice looking watch and one which definitely merits a visit to a jewellers and a go on the wrist. If I had to choose (and if I didn't already own the Aquagraph and the Aquaracer Chronotimer) I think I would spend the extra £400 and go for this over the alarm version, sure I'll never use the chrono for anything much, but then I'd probably never use the alarm either.
Posted by Robert Carrier at 18:00