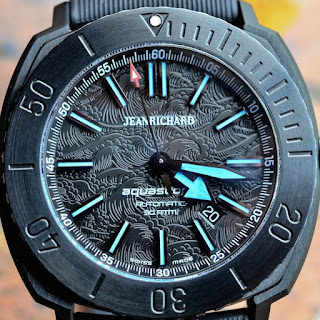 I've only been in there a couple of times, in the past I found the staff a bit odd, but this time I was served by Sophie who was very sweet (despite her colleague being a bit of a dick to her I thought). I did try on a Girrard Perregaux, but this post is about Jean Richard.

The first thing to say about Jean Richard is that I actually thought they had gone bust, but seemingly not... in fact they are the official timekeepers for Arsenal FC! They actually had the Arsenal watch in there and boy, what a thing to behold that is. 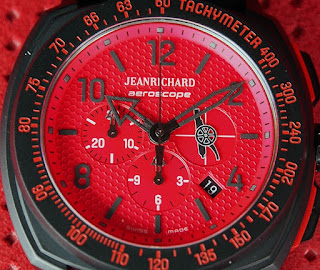 I mean, look at it. Who wouldn't want a watch with a spinning cannon second hand. How classy. I take back every negative thing I said about Manchester United's logo on the Carrera, by comparison it's weapons grade Chanel.

Sophie was keen to impress on me the quality of materials used in Jean Richard watches, and that the ETA movements are customised to their exacting standards. Well, at the prices they're charging they better be. I somehow had the impression that JR watches were in the £700-£1500 price range, but a lot of the watches on sale today were £3000+ (albeit with a 65% discount) and that seems high to me.

Also, every single watch in the shop (and there must have been a hundred or so) uses the same case. Google tells me they do do other watches, but not in Time and Gems they don't. To be honest I didn't mind the case, it has a Panerai thing going on, but some of the watches do look a bit plasticy if I'm honest. There were a couple in very bright colours (particularly pale blue and purple) that looked as if they might cost £70 from Argos, but there were a few watches that caught my eye.

One was a grey dial chronograph with an orange second hand (can't imagine why that would catch my eye, cough WAJ1111!) and the other was the Hukosai wave dial model. This one looks like it's actually worth the money and at an outlet price of £1050 down from £3000 odd, you would hope it couldn't lose too much more when you got bored of it. 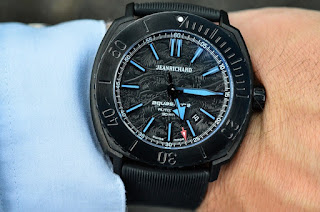 On the wrist the shape doesn't seem obtrusive, it's much less harsh than a Monaco for example and the black case, black rubber strap combo obviously helps give it a flow that it might not otherwise have. The watch is available in a stainless steel (uncoated) case as well, but they didn't have that in today. You can also get it in a PVD case with red markers and hands, but I think the blue is the better looking for sure.

Really, the movement speaks for itself and you know what you're getting, the thing that's going to sell this is the dial and it is pretty cool. Rather than just a print, the dial is textured like a carving, but I did feel like it was a bit... it wasn't exactly clear what I was looking at, if I hadn't guessed because of the Seiko watch-back Hokusais. I mean it's a nice texture and it looks quality, but I think you would tire of explaining to people what it's supposed to be...

I didn't have an opportunity to test the lume properly, I tried curling my fingers over the dial but not much was happening, so I'm not sure how good it's going to be. In my experience Aquaracers that have been on display in shops tend to glow at the slightest provocation, so I'm not sure the explanation that 'it's not charged' really holds much water.

Well it was interesting to have a look and try this on but I don't think I'll be buying a Jean Richard anytime soon, and those Arsenal watches should be banished from the face of the Earth if you ask me! I will post about my Girrard Perregaux experience shortly...
Posted by Robert Carrier at 16:42

Email ThisBlogThis!Share to TwitterShare to FacebookShare to Pinterest
Labels: Jean Richard, On the Wrist, Special Edition, Time and Gems (Bicester)