ON THE WRIST: Heuer Carrera JH80 and JH81

I'm not sure which visit it was (I seem to have been to Bicester an awful lot this year already) but I mentioned on the Calibre 11 forum that I had seen a Heuer Carrera with a silver dial and a red logo in there, and that it was on a bracelet. I thought the bracelet was unusual as I'd only seen these types of watches on leather straps previously. So the forum tried to establish which watch it was and we kind of concluded that it was a CV2119, albeit I was still a bit unsure.

So today when I visited I made sure to check it out properly so that I could confirm to the forum exactly which watch it was (one member 'dtf' was ready to drive to Bicester if confirmed that the watch was indeed a 'JH80' at 'Outlet' price). So on closer inspection it turned out the watch was exactly what I had thought, the CV2119 was designed by Jack Heuer and produced to mark his 80th birthday. The watch carries his signature on the backplate and can be had on either a bracelet or a leather strap. 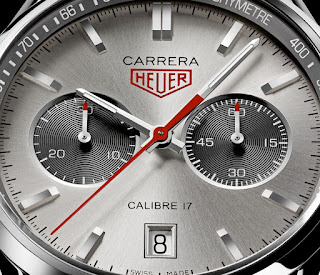 I must say, while this watch is definitely a bit too retro for my tastes, the dial is very nice and I really like the touches of colour that pepper the dial. The chrono second hand, subdial hands, logo and the '80' on the tachymetre are all rendered in red, which gives a nice pop to a watch that is largely shades of grey.

Personally if I was going to purchase this watch I would definitely choose the bracelet because I think it goes some way to modernising the look of the piece, but I can also see why most people would choose the strap because it seems more in keeping with the style and that may be why this generally quite desirable model has ended up in the outlet. You could of course purchase a leather strap and clasp to suit, but it wouldn't be cheap, I'm guessing, but I'd imagine you'd be looking at nigh on £200... but then if you buy from the outlet you're not paying the usual premium for the bracelet, in fact this watch is actually on sale at £3185, which is a considerable saving over the £4000+ list price.

The pushers though confirm the watches' retro aesthetic, and while I know the vintage watch fans love these sort of pushers I have to say that personally I'm not a fan. Again, in my opinion I can see maybe why the bracelet version might not sit (as) well with the market, because while the pushers and dial scream retro, the bracelet looks very much like it belongs on a more 'up to date' Carrera...

The backplate is a nice touch, with Jack Heuer's signature marked in red under the 16th century Heuer family crest and the watch is numbered out of 3000 pieces (I presume that's 3000 in total for the strap and bracelet versions).

Alternatively, you could choose the JH81 which while not designed by Jack Heuer, is chronometer certified and comes with a different dial design.

I think I prefer the dial on the CV2119 if I'm honest, but 'reverse panda' dials like this are very popular with watch buyers and wearing the leather strap this piece seems to work better overall, even if it's even more retro and thus less to my tastes.

Again, as I mentioned in my review of the new 50th Anniversary Monaco I'm not a big fan of the branding on the clasp, it just seems too 'in your face' somehow, especially for such a tasteful piece. No doubt it's probably echoing some old Heuer classic design that I have no awareness of, but to me it just looks a bit too brash on a watch like this. It probably looks less intrusive on the Monaco with it's striped dial etc, but even then I thought it was a bit much. It's not quite 4000 Series tackiness, but it definitely something I'd like to see toned down a bit. 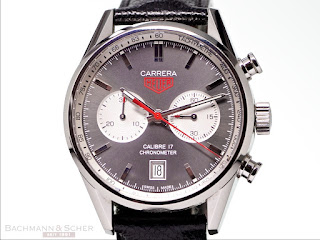 Unfortunately I didn't catch the price of the JH81 in the outlet, but it's sure to be considerably less than the original £4200 list price. Incidentally both these watches are sold out according to TAG's own website and by way of comparison Watchfinder are selling a pre-owned CV2119 for £3450, so this is definitely a chance for someone to get hold of a brand new one of these with a 2 year manufacturer's warranty for a very reasonable sum.