FEATURE: 'Trying' to Get a Second Opinion...

The other day I thought I had come up with a great idea for a series of blog posts - but it didn't pan out quite as expected. My idea was that I would get my friend Rich to review my watches, I thought it would be interesting to get a second opinion and reassured him that I wouldn't be offended (much) if he said he didn't like something or other.

Unfortunately, Rich said there wasn't really anything he didn't like about my watches, except that he couldn't wear some of them because they were too big for him (Rich has a Tudor Pelagos LHD that is 42mm and that is the absolute biggest watch he can really wear because his wrist is pretty small). 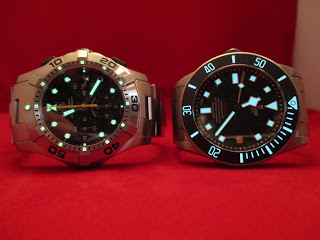 So it quickly became apparent that a series of posts was not really on the cards and I suggested that instead it would be interesting if he was to rank my watches from one to nine and I would do the same, then we could compare our results and see what the outcome was.

We both picked the Kirium F1 fifth and the Aquaracer Chronotimer sixth...

Then Rich picked the orange Calibre 16 Formula 1, the 6000 Series and lastly my quartz F1. Up until a few weeks ago I'm sure I would have done exactly the same thing, but because I was feeling so negative about the orange F1 at the time I picked the 6000, then the quartz then the CAU2012.

It's interesting to see that we both picked the same winner, the same second, third and fourth tiers and that there wasn't any watch that we really disagreed on. Indeed, the biggest mismatch really was that I rated the Microtimer a couple of places higher than he did, and I would imagine most would probably agree more with Rich than me. But that's fine... I know the Microtimer isn't to everyone's taste, but I love it. 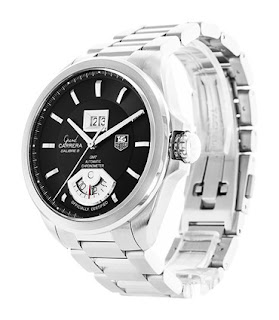 Of course, we did this before my new Grand Carrera GMT Calibre 8 turned up... and I thought it was too new (to me) to include in the list proper. But I asked Rich anyway and after much pontificating and indecision Rich finally said he would have placed it fourth had it been on the list. For me I can't really say because as that watch has just arrived it's obviously got that 'new watch honeymoon' thing going on and it could be 2nd now and 5th in a month....

Then I thought, why don't I get my wife to rate the watches as well (she loves watches but has no interest in them beyond aesthetics and she's not impressed by movements or complications particularly), and that produced a slightly different set of results. Again she picked the Carrera as number one (because it's gorgeous*), and followed Rich's lead in picking the Aquagraph as number two (which I must admit surprised me a bit), but then went a little rogue and picked the F1 Kirium. I guess I shouldn't be that surprised as the Kirium was my first TAG Heuer and she's always loved it. Fourth was the Calibre S Aquaracer, and fifth the Calibre 16 Formula 1. I was actually quite surprised by that, but she said she liked the orange on it. I was even more surprised when she said she would have put the Grand Carrera next if we'd been counting it... so in essence she liked the watch I've just sold better than the watch I've just bought! Oh deary me.

*Incidentally, my wife loves my Heuer01 so much that when I got it she said if TAG made a ladies watch like that she would 100% buy it. As it happens she bought an Oris Atelier Skeleton not long after, but I reckon if TAG did make a ladies version and it was 34mm max she'd still be more than tempted...

Next she picked the Chronotimer, and then the Microtimer. She's never been a huge fan of the Microtimer, she couldn't understand why I bought it in the first place, although she has mellowed towards it a bit since I've had it and she does concede that it looks good on me. Okaaaay. Bringing up the rear were the perennial tail-end Charlies, the 6000 Series and the F1 Quartz. I actually feel kind of bad for the 6000 because honestly I really like that watch, it's just playing a bit out of it's league being a smaller quartz piece from the 90s....

I also got some more feedback from a couple of people (including 'dtf' at Calibre11), and here we started to get a bit of variation (finally). dtf picked the Aquagraph first, and then the Carrera (the Carrera's first defeat). Then he went for the Microtimer, the Calibre 16 F1 and the F1 Kirium, but he also said he would have put the Grand Carrera third ahead of the Microtimer. He didn't complete the list thereafter so I will award points equally.

My other response put the Carrera in first place, followed by the F1 Kirium and the Aquaracer Chronotimer (which surprised me slightly), then the 6000 Series (another surprise). This was followed by the Microtimer and the Aquagraph, the F1 Calibre 16, the Aquaracer Calibre S (its worst result by far) and the quartz F1. This person is really into watches, but clearly ploughs their own furrow! :) 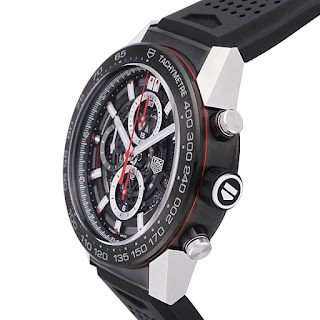 So for the moment, counting the five responses I've had, the leader board looks like this...

To be quite honest, on a different day I could quite easily have come up with this list myself, so I'm not unhappy with it. But what do you think? Do you agree - leave me a comment and let me know.
Posted by Robert Carrier at 14:35