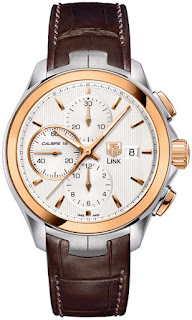 I know that in the past I may have been slightly... outspoken about watches with brown leather straps, and this stems from the fact that at heart I'm not really a conservative kind of guy. I'm never going to choose something tasteful and restrained when there's something outrageous and brash available (although having said that I have just traded in an orange Formula 1 for a distinctly refined Grand Carrera GMT, so who knows, maybe I'm just getting old?)

So why then, when I stood in front of the cabinets in Bicester Village, was it this particular Link I chose to try on? In all honesty I don't really know. Maybe it was the shiny gold bezel, maybe it was the vertically fluted dial, maybe it was... the brown leather strap.

Probably not, but, it can't be denied that this watch wouldn't look right on a black leather strap. Which is why I'd have it on a bracelet.... but seriously, this design lends itself to a brown strap and as brown straps go, this one is quite nice. I don't mind brown so much when it's very dark brown, and this one is quite dark.

Look, I'm not going to bleat on about the strap, because I don't have anything bad to say about it. Indeed, it's actually a very nice strap, and I would happily wear it. Oddly enough, the strap isn't the thing I didn't like about the watch... and it's not like it's a big deal or anything, it's just something that I just wished was different.

I'm not used to two-tone watches to be fair, and if you are going to make a two-tone watch then there's only so much you can do. Clearly the pushers and crown should be rose gold, but I'd prefer it if they weren't. I don't mind the bezel, the sub-dial, the hour markers, the TAG logo or the hands... but the pushers and crown just niggle me a bit. So much so that I decided to mock up my own version. 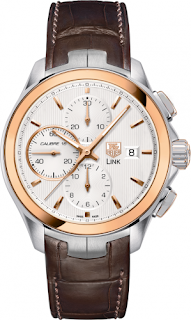 I know it's only a little thing, but I think that looks better. I know I'm probably the only one, but to me the gold puts too much emphasis on the right side of the case and detracts from the design rather than adds to it. I'm not saying I couldn't live with it, or that I would order a steel crown and pushers to make my perfect watch reality, I'm just saying that's how I would have done it. 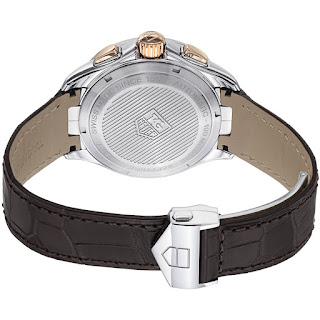 Given that any number of Carreras with the Calibre 16 have a glass display back it's a little disappointing that this watch has a solid rear plate. Still, the back is nice enough and fluted to complement the dial. Being 43mm in diameter may make it a little overstated for some people, especially for such a dressy piece, but personally I found it fitted my wrist just perfectly. And looking in the full length mirror by the door it looked very smart, but perhaps not with my navy blue combat shorts, T-shirt and lime green trainers (I dress to impress at all times, me).

Obviously with the rose gold elements this isn't a cheap watch, but the outlet price offers a hefty saving over list. I can't remember the exact figure but the outlet price is £3885, which is at least £1000 off. Sure, there's no way I would pay this much money for a watch like this because I wouldn't get enough wear out of it to justify the outlay. But, for something that's so not really my style, I did rather like it.

I do want a Link eventually, it's just finding the right one. I'm very tempted by the Calibre S models but like all Links they are hard to find pre-owned in good condition and the NOS ones are still a good bit over £2000, which for probably very occasional wear is a bit steep for me. Ah well, you never know what might turn up when you least expect it...
Posted by Robert Carrier at 17:07