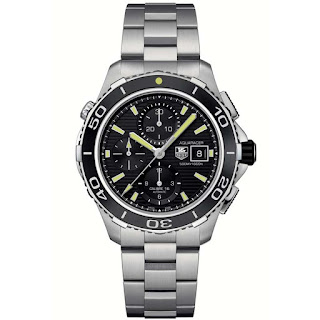 If ever there was a watch you need to see 'in the metal', then this is it. None of the pictures I've found seem to do it justice or illustrate just how strong the green colouring on the dial is. If you are a lume fan, then this could well be a watch you should investigate because not only is the lume itself very strong, but the green hands and hour markers give the impression of lume even when the watch isn't charged.

This one was on offer at a discounted price of £2415, down from £3200 (IIRC). It feels very nice on the wrist and I must admit I was rather surprised how much I liked it once I got it on. So much so that I didn't really want to take it off! 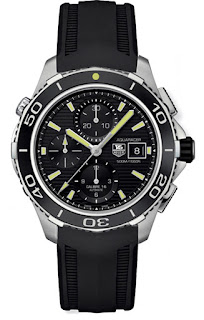 But eventually I did because I wanted to try on and compare the same watch with the (rather understated it must be said) rubber strap. I have to say I much preferred it on the bracelet, it seems to be a common theme with me lately - although I do love my Calibre S on the rubber band I bought recently. I switched back to the bracelet version and couldn't help but to start comparing it with my Aquagraph... both 500m divers, both chronographs, both sporting strong lume (although the Aquagraph has more if it - having a well lumed bezel).

This one though does have a ceramic bezel insert and is much more wearable than the lump that is the Aquagraph due to it's thinner case. Actually it's very nice on the wrist and gives off a very expensive air somehow, but that green is a constant reminder that this is at heart a tool watch. 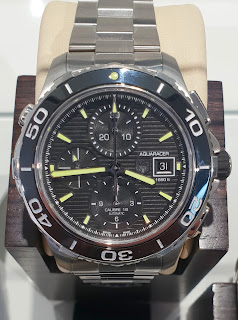 I must admit I'm not wildly enthused by the Calibre 16 movement, I've had one (in my recently sold CAU2012) and it's not the smoothest of winders, but I believe it's quite a reliable engine. The only downside of the Calibre 16 of course is that dial layout isn't to everyone's taste as it's non-symmetrical (left to right), though I have to say it never bothered me at all. 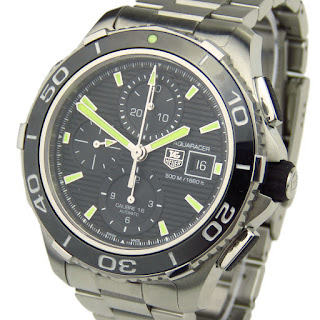 A slightly more flattering photo from the Parkers website

This is a tricky one, because despite my reservations I really, really liked this. I love the green on the dial and it looks much classier than on the chunky green and black 500M Aquaracers which are quite cool but not terribly versatile. Despite the strong green it retains a certain 'quality' feel and the bracelet, while brushed, seemed to give it a definite razamatazz somehow.

The sticking point for me really is that I can't help but think it won't add anything to my collection that the Aquagraph doesn't already bring. Another black dial steel dive watch isn't really what I need right now and the blue version doesn't have those cool green hands (because, well, that would look awful). Interestingly, they had the blue version in the outlet at Bicester, in fact they had two. Tom was telling me that they have the same part number but with a different suffix, but they are clearly quite different blues. One reminds me of the blue on the Tudor Pelagos, that kind of almost 'Royal' blue and the other is a bit darker and more subdued. 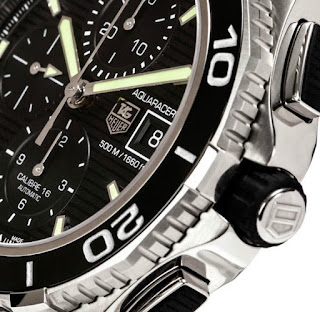 One other interesting thing to note is the rubberised crown which is kind of the pre-cursor to what we now have on the Carrera Heuer 01s. I did notice one or two on eBay that had the rubber crown missing (one listing claimed it was a 'common problem'..) so if you're buying second hand that's definitely something to pay attention to as I'm sure it won't be cheap to replace.
Posted by Robert Carrier at 18:00