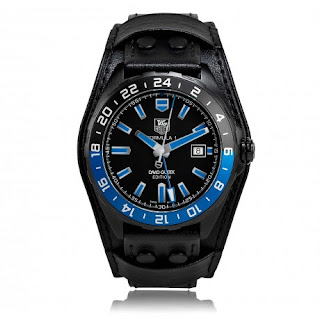 Well, I think the first thing to say about this is, who knew it wasn't quartz? I certainly didn't. It was only the white TAG logo and the price (£1850/$2450) which made me check and in fact (perhaps not surprisingly) it shares the Calibre 7 movement from the WAZ211A.BA0875 GMT. Strange then that there's no mention of this on the dial, usually TAG include the movement calibre on the dial or at the very least the word 'automatic'.

To be honest, now, comparing this with the WAZ211A I think I prefer the face of this one, and I really didn't expect to be saying complimentary things about this. I think the blue hands and markers look great and (at the risk of sounding like a broken record) I would be interested to see how this looked with a black rubber strap instead of that comedy leather cuff. I don't know if it's possible to remove the 'strap' from the cuff, but even if it was I really don't like this style of strap with the rivets, I've always thought it looks cheap (even when you see similar on a seriously expensive watch), at least they aren't silver (as they often seem to be) that would have been even worse.

Sorry, but the fact that this isn't quartz has really thrown me off, I was all ready to slate this, but now that I actually look at it, it's actually quite nice, the face at least. In fact if we could have this with 'Calibre 7' instead of 'David Guetta Edition' on a black rubber strap with a matching blue back (think Breitling) then I think we could be in business here. 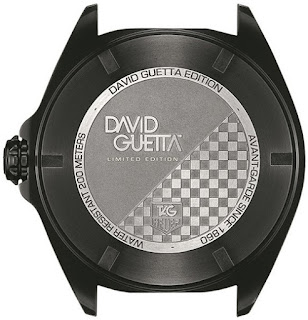 Now that I've managed to find a picture of the back, I notice it doesn't mention its 'Calibre 7' movement credentials there either, which is very odd. And the chequered flag engraving is a bit out of place as well, I mean as far as I'm aware Mr Guetta is a DJ, not a racing driver... fair enough though, he probably travels a lot so the GMT function could well be useful to him.

So overall, I find this watch a bit confusing. David Guetta is not an obvious brand champion and I think that's partly why I 'assumed' this watch would be quartz, keeping the price low in the same way they did with the CR7 for Cristiano Ronaldo. The fact that it's automatic makes it more interesting, albeit the price difference over the standard GMT is a considerable £300 or thereabouts. Then again it's not unusual for a PVD case to make that kind of difference, just look at the current Aquaracers, and those leather cuffs must have cost 'something'... better not to have bothered if you ask me, maybe it's a 'French' thing?

Strange to say, but if one of these came up on the second hand market at a decent (read: cheap) price, I might be tempted. I really do like the dial and the bezel looks great too, I was going to say that the bezel is shared with the GMT but that's not strictly true. It looks similar but the GMT is actually 41mm whereas this model is 43mm in diameter (another plus for me).

Okay, so I've shocked myself with my postivity here, and the more I look at that dial the more I like it. Unfortunately Google can't find me a picture of the lume, it would be interesting to see how it looks with the blue markers and hands, rather tasty I shouldn't wonder!