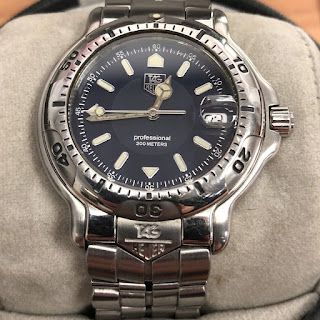 I've been tempted by these for some time now, but held back by a couple of things. The first was that I'd never seen one anywhere and thus hadn't been able to try one on, and at 38mm I knew it was right on the limit for me. The other was cost, most of these seem to start at £500 and go way up for some of the really nice special models, with some really cool dial colours and even white gold cases.

So when I spotted this one on eBay at a 'Buy it Now' price of £349, I just couldn't pass it up... as it happened it had a 14 day return option, so I thought there really wasn't anything to lose, so I took the plunge and I'm really, really glad I did. My other worry (as usual) was the bracelet, or rather the clasp. But so far, and I haven't worn it for very long admittedly, it seems okay. It's sort of off to one side a bit, but I think that makes sense because of the shape of the deployment.

I thought the watch was going to be black dialed, but when it arrived it was blue! Take another look at the picture, it's blue not black. So this is my first non black dial TAG, incredible isn't it, seven watches and not a single coloured dial until now (even the two I sold were black dial as well). Also, as someone helpfully pointed out, this is yet another watch which doesn't have the classic red and green logo, so again seven watches and not a single classic logo (and the two I'm gunning for haven't got it either!). 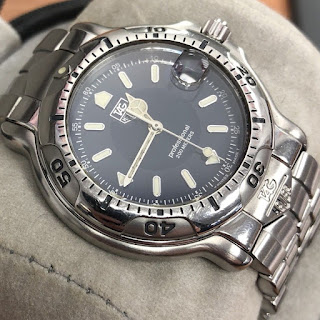 The seller on eBay was Tilley's Jewellers in Swansea (actually a pawnbrokers it seems) and I don't know whether the warranty card has been mixed up somewhere or whether it was just filled out wrong when it was originally sold, but the number on there is WH1113 not WH1115, which suggests a silver dial. Really I guess I should have questioned this, but since it's out of warranty and I don't have any concerns about authenticity I'm not too worried really.

It's my first cyclops too, and I'm okay with it so far, it really doesn't bother me... well who'd have thought it? I am having to get used to the thickness though, or rather the lack of thickness, it's my thinnest TAG for sure, which takes some adjustment because the way the bracelet sits on the wrist is quite different to what I'm used to. It's also quite flexible, which again I'm not accustomed to.

The watch was advertised to fit a 7.5" wrist, and I thought I had a 7" wrist (I really need to measure again) so I was surprised that the watch only just fitted, and in fact was a little tight. It had one hole of adjustment left on the clasp so I let that out and it helped a bit. A few weeks off the pies and I'm sure it will be fine.

It's really in pretty good condition, especially for a 19 year old watch, and I strongly suspect I'm the first person to ever move the bezel, it's solid as a rock (in a good way). The glass is immaculate and the (very unusual) bracelet seems to be in very good shape too, no stretching or damage that I can see.

I've long wanted to get some older TAGs into the collection, but all too often size and practicalities around the clasps make me nervous. I'd really like an S/EL too, and a 4000 Series, and they are both possibilities for the future. I'd also really like an original plastic F1, but they really are too small so it seems a bit silly. Maybe a slightly later one on a bracelet which a chrono would be a better bet... but nice ones seem to command higher prices than you'd expect.

I'll review this in more detail when I've had a bit more time with it, but I can say this - when I opened the box again today, I already like it more than yesterday when it arrived, and I liked it yesterday. If it proves comfortable, then I don't see this one going anywhere...

Expect more 'Buying Experiences' in the near future, I'm hoping to pick up my next TAG at the weekend!