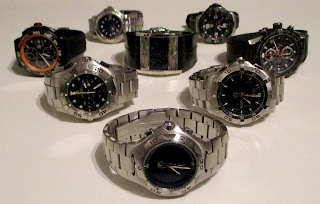 
I keep meaning to do a full blown 'State of the Collection' post, not just of my watches but of everything TAG Heuer related that I've accumulated... and I will, but it's going to take a little time to put together. So in the meantime, here's a (not very good) photo of all eight watches taken today.

Also, over at Calibre 11, forum member 'dtf' suggested a post comparing the new Aquaracer Chronotimer with the Formula One Kirium, I think this is an excellent idea since they contain the same ani/digi module, but I think I need to spend a little more time with the Chronotimer before comparing it to my very first TAG Heuer... I wore it today though, and I'm still loving it so far.
Posted by Robert Carrier at 21:53